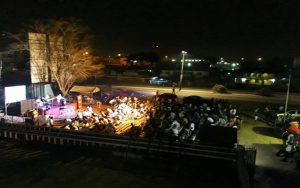 Tens of thousands of Ghanaians ushered in the New Year, with songs, cheers and mesmerising firework displays.

Huge crowds gathered in church auditoriums across the country to thank God for a successful 2017, making one resolution – to desist from repeating bad habits in 2018.

From the nation’s capital, Accra to Sunyani in the Brong Ahafo Region, revellers prepared to forget the turmoil of the past year to welcome the New Year.
Inside Night Clubs, hotels and restaurants, bands played traditional tunes and other songs to mark the occasion.

Revellers on the famous Oxford Street at Osu in Accra tooted horns, danced to songs and lit the sky with fireworks.
Shouts of ‘Happy New Year’ reverberated in churches after the minute bar successful lay on the hour bar. Soon it was 12 a.m and bells rung, amidst jubilations.

Members of the Gospel Ambassadors Church at Patasi in Kumasi thanked God for preserving the peace of Ghana. They prayed for wisdom for president Nana Addo Dankwa Akufo-Addo and his appointees as they prepare to face the second year of their four-year term.

The Multimedia Group held a watch night service for residents in Kumasi at the company’s forecourt. The service was led by Pastor Obed Joy Obeng of Prayerline Morning Devotion on Luv FM who lifted a prayer for the nation.

Though 2017 was not turbulent as 2016 was in both global and local politics, it was the year major changes took place in some countries.

In Zimbabwe, the 37-year rule of President Robert Mugabe came to an end after a political miscalculation led to the intervention of the military.

South Africans will now heave a sigh of relief after the ruling African National Congress (ANC) successfully replaced scandal-hit Jacob Zuma, described by political pundits as a man of troubles.

The year 2017 will forever be remembered as the most scandal-filled year for Hollywood to date. Mega movie mogul Harvey Weinstein was accused of sexual misconduct, a claim that spurred a slew of allegations against other top stars.

But Ghanaians are continuing homegrown efforts to consolidate the change brought in by the 2016 general elections.

President Akufo-Addo has promised his government will move at a “supersonic” speed in the New Year, repeating his resolve to see a developed Ghana beyond aid.

From the team at Myjoyonline.com, we say ‘Happy New’ to you, you and you. And we hope to be the heartbeat of news in 2018. You can always trust us to deliver to your satisfaction.
Myjoyonline.com