Anlo Chiefs speak on the ‘boycott’ of Rawlings’ funeral 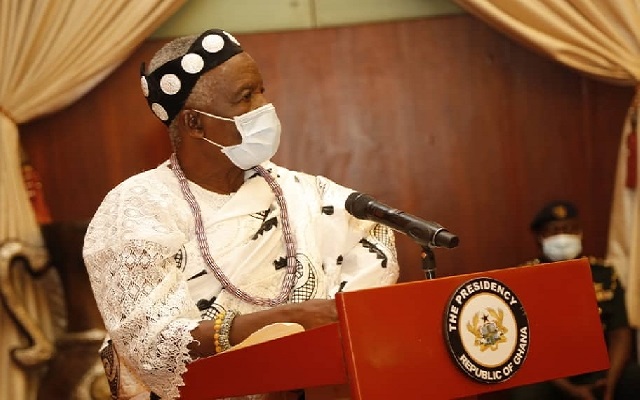 Former President, Flt. Lt. Jerry John Rawlings was laid to rest on January 27, 2021, after a four-day burial ceremony held by the state in his honour.

Having played a pivotal role in the development of the Anlo Traditional area and subsequently being enstooled as Togbiga Nutifafa (Senior Peace Chief) for his role in maintaining peace and stability in Ghana, many were shocked that chiefs from his hometown were absent at the funeral and during the entire process.

Speaking after the event on Thursday, Secretary to the funeral planning committee of the Anlo Traditional Council, Agbotadua Kumassah explained exactly what constituted the misunderstanding and subsequent boycott by the chiefs.

According to him, they were sidelined in the decision-making process right from the start.

“Among the Anlo people, when death occurs, the head of the family is the first person to be informed. It is he who directs the other people who should know of the death by sending messages. In the case of the former Head of State, the announcement of his death did not come from the chiefs of the Anlo state. Not that they have a sole monopoly over him, but he was a chief and the announcement of the death of a chief is different from that of an ordinary person and he was not an ordinary person.

“The man died on November 12, 2020, around 11 am, and we heard about the death at 12.o clock. We did not understand the haste in announcing his death, who was in charge of the arrangements?

“Some members of his family came, led by Victor Gbeho, to Anloga, to meet the chiefs of the 36 states that constitute the Anlo State. They apologized through him and promised that whatever they will do, they will keep us in mind and discuss their decisions and plans with us,” he said.

Though their expectations were that things will proceed on a better note after the first incident, the contrary, according to Togbi Kumassah happened.
“As a sign of fulfilling that promise, we were invited to come to Accra and meet them at the Ridge residence of the late former Head of State. We were there on that Wednesday to learn that when they came back on that Monday, the following day, they travelled to Kumasi to inform the Asantehene of the death of our chief.

“We found that also as an anomaly because he was not just a citizen of Anlo, he was a chief, and there are procedures to announce the death of a chief, so this second attitude of theirs also made us feel irritated and fearing that the leaders of the funeral planning committee in Accra did not want to involve us in the planning for the funeral”.

“At that first meeting in Accra, the issues of burial dates and place of burial were discussed, they were suggesting December 23, 2020, but we the chiefs were not happy with that date because we felt there was an impending general election to be held on December 7, 2020, and looking at the political landscape at the time, we felt that if there was a result that would not be clear, without a clear winner and they called for a run-off, the run-off takes three weeks to organize, that would have interfered with the burial date.

“We were suggesting that we wait till after the installation of the President on January 7, but they were saying government machinery will not support that decision and that they had to do a lot of things and so we the chiefs were not happy with it. We also talked about the place of burial, and we were informed that he will be buried in Accra at the military cemetery. That one also did not sound very well with us because that meant to us that it will be military people who will bury him, but according to our traditional customs and practices, the chiefs are the last people to perform any burial rites for him but it appeared the people were not ready to accept that position.

“We both agreed that we should retire and reconsider our positions during the next meeting. What happened was that when we came back then we saw on social media, the place and date flying all over the place that he’ll be buried on 23rd and in Accra.

“It was that which caused the Agbotui and Tamakloe families to petition the government that that was not the general opinion so the government, realizing there was a division in the family, wrote back and instructed that, those who were the leaders of the funeral planning committee should meet and resolve their differences and inform government accordingly,” Agbotadua Kumassah explained.
After this, the President ordered the family to resolve all outstanding matters regarding the burial and convey the agreed date to the Presidency.

“It was because of that they came down to Anloga for the second time to meet the chiefs again. The chiefs were not in good faith with them…They retired and came out, pleaded and paid a certain amount, to pacify the chiefs. After that, we were very sure that we have resolved the differences. At that meeting, 3 of us were chosen to represent the traditional council during committee meetings so we thought we had streamlined everything.

“When they went back to Accra, there was another publication again. This time, they said the man will be buried on January 30, but the government came to tell them that the January 27, will be more acceptable to them. This also surprised us so we had another meeting with the Agbotui and Tamakloe family members. But Hon. Victor Gbeho and Col. Agbotui were not there so these families, we told them they are causing problems for us because the family has right over the body, not the chiefs but the chiefs can only support the family.

“It was that which caused them again to write to the government again, that the decision to bury the person in Accra was not in their interest and then their leaders were not speaking their mind. At that time, there was a rift on the place of burial. So the letter that they sent to the presidency, we were waiting for a response from them, that response never came.”
The Council then petitioned for a release of the body after the state burial so that they could have access to perform the final burial rites as chiefs. They also hoped that an invitation for the state funeral will be extended to them through the appropriate means, that also did not happen.

“On the 22nd and 23rd, there were protests in Anloga, with petitions to the Avadada of the Anlo State, to petition the government to release the body, after the performance of the state funeral to enable them to perform the final funeral for him.

“And we were expecting cautiously that this request might be considered but on Saturday, we saw a line up of activities and there was no mention of Anlo Traditional Council on any of the dates, we only saw traditional rites which didn’t mean it was for the Anlo people so we came to the conclusion that they were not expecting us at the funeral.

“On Monday, 25th, in the evening, we learnt, after Avadada complained, that they sent some invitation letters to the registrar of the Anlo Traditional Council to be delivered to us and we found that also not appropriate because the funeral started on the 24th which was Sunday, then Monday, in the evening before they sent the invitations after complaining to the funeral planning committee in Accra as if we are forcing on them that we want to be there.

“They sent only 30 copies of the invitation. A chief cannot go for that funeral, there must be a drumming group to announce our presence. And that 27th too was designated for military funeral rites so we felt that we were not considered in the scheme of things and felt that our presence was not needed.

“Until the afternoon of 27th, we were optimistic that the body will be released to us, it was until the body was buried that we realized that we will not have the body.
The family and the Chiefs intend to meet coming Saturday, on January 30, 2021, to see the way forward, it is after this that the Anlo Traditional Council will decide whether or not to proceed with a funeral without the mortal remains of Mr Rawlings.

“The chiefs are meeting coming Saturday, at the Avadada’s palace, to consider the next line of action, I’m very sure it will be discussed at that meeting whether there should be a traditional funeral or we leave things as they are,” he concluded.