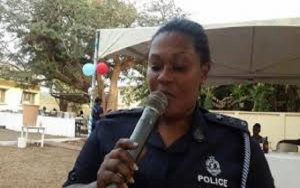 The Ashanti regional police has been accused of killing two suspects, one of whom is a 38-year-old man at Asawase a suburb of the regional capital, Kumasi.
According to the youth, the police shot and killed Awudu Osman and Lukeman Mohammed during a swoop in the area.
Both had been accused of armed robbery by the police.
One of the residents told Luv FM’s Erastus Asare Donkor that when the police got to the area, they arrested the two and put them in handcuffs.
They were later made to sit on the ground where Awudu was beaten and stamped on many times by the police who demanded that he told the truth about where they had hidden the guns.
Although the deceased denied knowledge of what he had been accused of, the police persisted and “kept beating him.”
The family of the deceased has given government three days to intervene in getting justice for their beloved son.
But the police deny any wrongdoing.
Public Relations Officer of the Ashanti regional police ASP Juliana Obeng explained that the suspects attempted to escape from a storey building when they were arrested.
She said the police was informed about the activities of the two dead men and other accomplices.
According to her, Luckman Mohammed alias alpha, Awudu Osman, alias Awudu Ninga and other three suspects Emmanuel Fosu, Farouk Amadu and Saliu Yakubu per police intelligence use motorbikes to rob their victims at gunpoint’
“Suspects Lukeman and Awudu were traced and arrested at their hideout where they confessed to police that they had arms and had hidden them in an uncompleted storey building at Sepe, a suburb of Kumasi.
“They led the police to the area to retrieve the arms. They took the police to four separate hideouts without any trace of the said arms,” she recounted.
She added however that “while the search was ongoing, the two suspects who were in separate handcuffs jumped from a storey building to escape from the police.
“They were chased and fired at to immobilize them from escaping but Awudu died instantly while Lukeman was pronounced dead at the Komfo Anokye Teaching hospital,” ASP Obeng said.
However the other three suspects Emmanuel Fosu, Farouk Amadu and Saliu Yakubu are in police custody assisting in investigations.
Source: Myjoyonline.com