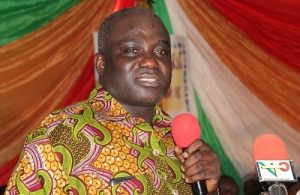 The Minority in Parliament says government’s policy of selling subsidized fertilizer to farmers is proving unproductive because the products are being left to rot in warehouses in cocoa growing areas.

This according to the Minority is because cocoa farmers are unable to afford the fertilizers that government claimed to be selling to the farmers at subsidized rates.

Ranking Member on Parliament’s Food, Agric and Cocoa Affairs Committee, Eric Opoku, who revealed this in an interview said the Minority is concerned about the development.

“The problem is that after transporting the fertilizer to the regions the farmers are unable to buy and they are decaying in the stores,” The MP lamented.

He said the farmers even struggled to transport fertilizers to the farm when it was being distributed to them at no cost under the Mahama administration.

“Now you are selling and they don’t have the money to buy so even though the season for the fertilizer application is almost over, the fertilizers are piled up in the stores,” he claimed.

Eric Opoku insisted agric authorities on the ground are struggling to deal with the situation.

“Even the Ministry of Food and Agriculture officials at the local level as to what is going to happen to the fertilizers and the LBCs are also confused because the farmers are not buying,” he emphasized.

Eric Opoku said he was amazed at the COCOBOD CEO’s response to their call for the reversal to free fertilizer policy.

“We drew the attention of government to the fact that we spent so much money on the fertilizer, had it not been the purchase of the fertilizer the producer price of cocoa in Ghana would have gone up per the formula you use in determining the price so the farmers indirectly have paid for the fertilizer,” he stated.

Eric Opoku said he the Minority was only trying to draw government’s attention to the futility of their subsidized fertilizer program.

“Keeping them in stores and looking on for the fertilizers to decompose in the stores, we cannot understand any reasons that can be assigned to that particular action so we wanted government to as matter of urgency revert to the free fertilization exercise and ensure that the fertilizers are given to the farmers free of charge,” he said.

The Asunafo South MP further expressed his amazement at the claim that the fertilizers procured under the “free fertilizer” program are substandard.

“You cannot buy fertilizer in Ghana as government without certification from Cocoa Research Institute of Ghana. They have an agency responsible for certification of fertilizer that will test the fertilizer and make sure that it is suitable for cocoa production in Ghana before they will approve for you to buy,” he explained.

Eric Opoku indicated that the Public Procurement Authority upholds this process to the latter and accused the COCOBOD CEO of evading the real issues.

“When you are confronted with issues you cannot respond to and there is pressure on you to respond to those issues, you cleverly seek refuge in issues tangential to the issues on the table as a way of diverting attention of people from those important issues,” he said.

Eric Opoku also reemphasized the claim that the fertilizer being sold by the current COCOBOD management was procured under the “free fertilizer” program of the erstwhile, John Mahama administration.

Under the former administration fertilizer was procured and distributed freely to Cocoa farmers.

The current administration has however truncated the free fertilizer policy and is now selling them to the cocoa farmers at a subsidized rate.

Speaking at a press conference in defence of the change in policy, Chief Executive of COCOBOD, Joseph Boahen Aidoo, accused the former administration of distributing substandard fertilizer to the farmers.

He claimed that the current administration has procured better quality fertilizer and is selling to the farmers at subsidized rates.

Eric Opoku is nonetheless taken aback by this claim because according to him COCOBOD is selling the so-called substandard fertilizer under the new program.

“Why is it that they are selling the same fertilizer with the “not for sale” sign embossed on them to the farmer?” Eric Opoku quizzed.

He said the current COCOBOD management had no need to emboss “not for sale” on the fertilizer they claim to have bought.

“All the granular fertilizer in bags packed in the stores have the embossment “not for sale” because they were procured at the commencement of the 2016/2017 cocoa season,” the Asunafo South MP revealed.

Eric Opoku said the Minority will challenge any claim of fertilizer purchase by the current COCOBOD management.

He said the Dr. Stephen Opuni-led COCOBOD administration had already spent 355 million cedis from the syndicated cocoa loan to procure hi-tech fertilizer for the 2017/2018 cocoa season.

“In their budget they have also made allocation to buy fertilizer ahead of the next cocoa season, so they are committing 58 million cedis to the purchase of fertilizer because they are saying that they are going to sell to the farmers so they are subsidizing,” he said