Dr. Amissah Arthur Described As The Most Disappointing Veep 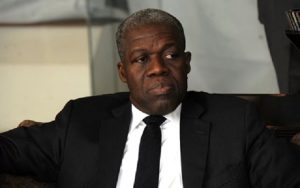 The former veep has said just a year into the New Patriotic Party (rule) rule, Ghanaians are already searching for alternatives because they are not happy with the way the country is being run.

Mr Amissah Arthur made the statement on the 25th December, 2017 in Ho when he spoke to the media after a visit on the Christmas day to make some donations to children on admission at the Ho Regional and Municipal \Hospitals with his wife, Matilda Amissah –Arthur.

He said currently he’s not thinking about that because the NDC is not ready yet in choosing who leads the party in 2020.

But the former Member of Parliament for Nsuta Kwamang Beposo, Kwame Osei Prempeh in a Facebook post questioned former Vice President’s effrontery to suggest Ghanaians are suffering when he as the head of the Economic Management team of the erstwhile John Mahama government did nothing to improve on the living conditions of Ghanaians.

“The most disappointing Vice President of all time in Ghanaian history. You are supposed to be an economist and a former governor of the Bank of Ghana yet you made no impact on the Ghanaian economy. From growth of 14 percent in 2011 you left with a miserable 3 percent in 2016. You are part of the gargantuan corruption of your regime. The arrogance of your wife in the famous we won’t give you any chalk today or tomorrow” is still fresh in our minds. You’re an epitome of incompetence and corruption. You better keep your little dignity you have and enjoy your retirement,” the astute Lawyer fumed.