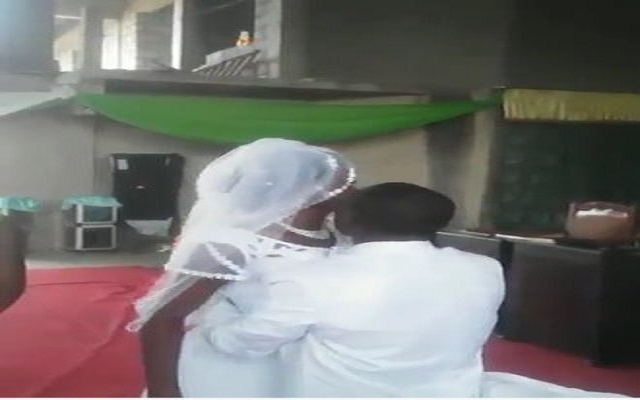 A mass brawl erupted between wedding guests after the groom’s father forcibly kissed his son’s bride on stage in front of hundreds of people.

Shocking footage shows the drunk father-in-law pulling his son’s bride towards him for a kiss as horrified wedding guests looked on. This act led to a fight between members of both families.

At first, the lavish wedding, which was taking place in the city of Yancheng in eastern China’s Jiangsu province, was going well until the blushing bride stepped onto the stage with her new father-in-law in front of the guests. The older man then puts his arm around her and she looked extremely uncomfortable by this. Suddenly, he stepped in front of his daughter-in-law and kissed her on the mouth.

The bride is seen struggling to break free from her father-in-law’s grasp as the wedding DJ and guests are heard shouting in shock. Some guests howled in outrage while some others clapped and cheered.

Another video shows the aftermath with members of the bride’s family rushing the stage and attacking the father-in-law. Members of the grooms family then came to defend their father and violence broke out as both families fought.
Police investigated the incident and confirmed the brawl had taken place on February 22.

The clip went viral on social media and this prompted the families to come together to release a joint plea.

They said: “We didn’t expect the incident to take such a negative turn. The two families are now in an awkward position and the newly-weds have suffered because of it too.

“The father-in-law, who was given too much to drink on his son’s big day, deeply regrets his actions. We ask social media users to stop sharing the videos and let our family sort this out privately. We do not wish to become famous, nor do we want to become the butt of every person’s joke. Had this happened in your family, would you be sharing it like this.