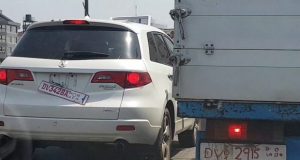 The Inspector General of Police, David Asante-Apeatu has ordered officers across the country to desist from impounding vehicles with Defective Vehicle (DV) and Direct from Port (DP) number plates between 6am and 6pm, as was currently being done.

He noted in an internal memo issued to all commanders that the Road Traffic Regulations do not authorize such arrests.

“Sections 45-50 of the Road Traffic Act 683/04, as well as regulations 23&24 of the Road Traffic Regulation 2012 (L.I 2180), are clear on the use of DV and DP number plates….INGPOL directs with immediate effect no personnel should arrest any motorist with trade license plates with regard to time of movement indicated above [1800hours and 0600hours (6pm – 6am)],” the memo available to the press said.

The IGP added that it was “unlawful” for officers to impound vehicles with such number plates and arrest their drivers.

“Any arrest made with regard to time of movement of trade license plates by personnel is unlawful. Commanders must bring this to the notice of all personnel for strict compliance.”

While urging the Director General of Public Affairs, Sheila Buckman, to sensitize the public on the development, Mr. Asante Appeatu warned that any officer who is found to have flouted the directive will be sanctioned.

Officers of the Motor Transport and Traffic Directorate (MTTD) have, in the past, insisted that no person should use trade license plates outside business hours, which are between 6am and 6pm.

They often referred to Section 50 (b) of the Road Traffic Act 2004, Act 683, which, among other things, prohibits users from carrying passengers or goods for hiring or reward.

(a) at any one time on a road, a greater number of motor vehicles than the person is authorized to use by virtue of the trade licence or licences,

(b) a motor vehicle on a road for any purposes other than a purpose which has been prescribed by Regulations, or

(c) the trade licence, or any of the trade licences, for the purposes of keeping on a road in any circumstances other than circumstances which have been prescribed, a motor vehicle, which is not being used on that road commits an offence and is liable on summary conviction to a fine of not less than 500 penalty units and not exceeding 1000 penalty units or to imprisonment for a term not exceeding 3 years or to both.