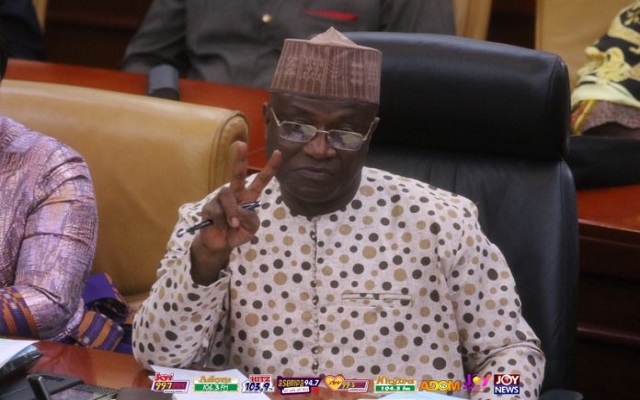 The Majority Leader in Parliament, Mr Osei Kyei-Mensah-Bonsu has apologised on behalf of his colleague Members of Parliament (MPs) for the fight in the House on Monday, December 20, 2021.
“This is a very shameful and embarrassing moment for us in Parliament. I think all of us in Parliament must be bowing down our heads in shame”, he said.

Choas erupted in the House during the consideration of the controversial Electronic Transaction Bill popularly known as E-Levy resulting in the exchange of blows.

Mr Kyei-Mensah-Bonsu said such an incident should not be allowed to happen again.

“The Parliament of Ghana has not witnessed such bestiality before. Do we want to inflict carnage in Parliament or do we desire the title honourable members”, he queried.
Mr Kyei-Mensah-Bonsu said the adjournment of the house would allow some cool heads to prevail.

That, he said, would also allow for further consultations among the Majority and the Minority, as well as other stakeholders.
Mr Kyei-Mensah-Bonsu, who is also the Leader of Government Business, said the budget had been passed and ,therefore, the erroneous impression that is being created that there was no budget was untrue.
The Majority Leader, who recounted how the incident happened on the floor of the house, said the first Deputy Speaker, Joe Osei-Owusu, who was presiding at that time and was not well, stood up from his seat to go and take some medication and later to visit the washroom.It was then that he was physically prevented by some Minority MPs that led to the confusion.

He explained that whoever said the Second Deputy Speaker could not exercise his right of casting his vote as a MP was wrong because there was no constitutional provision or any standing order in Parliament that debarred him from voting when he presides.
At a separate press conference, the Minority Leader, Mr Haruna Iddrisu, reiterated that the House’s decision to adjourn sitting to January 18, 2022 was an opportunity for further consultations on the controversial E-Levy bill.

He was optimistic that the government would reach out to the leadership of opposition to engage in order to reach compromises without necessarily denying the government the needed revenue.

He further called on the government to cut profligate expenditure by being fiscally disciplined.
“So, arguably what has happened is to allow for deeper consultations on the way forward, on the nature of what ought to be done about the nature of raising revenue for the government,” Mr Iddrisu stated at a press conference in Accra, after the adjournment of the House.

“But E-Levy, we are resolved, unequivocally that we will not support it in its current form and nature as it will take away the income of a larger proportion of the population in multiple phases,” he said.
source :Daily Graphic