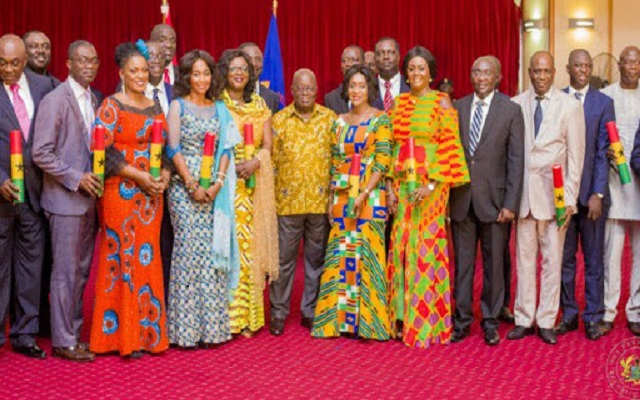 Social media users have taken to their timelines to react to President Akufo-Addo’s first list of ministers he wants to work with in his second tenure.

While some found it remarkable, others thought some of the nominees are not qualified to operate the sector they have been designated.

President Akufo-Addo on Thursday submitted to Parliament for the approval names of persons he would want to fill various portfolios.

In all, the President announced a total of 30 Ministers, and 16 Regional Ministers, bringing the total number of Ministers to 46, eight of which are women – six ministers and two Regional Ministers.
The names of key sector nominees and regional ministers, have been forwarded to Parliament for vetting and approval.

Mr Alan Kwadwo Kyeremanten has also been kept at the Trade and Industry ministry.

Messrs Dominic Nitiwul and Ambrose Dery will continue at the Defence and Interior ministries respectively.

Madam Shirley Ayorkor Botwe has been renominated Foreign minister, whilst Godfred Dame, has been penned as Attorney General and Justice Minister.

Mr Osei Kyei Mensah Bonsu, Majority leader in parliament has been designated minister for Parliamentary affiars, whilst Madam Ursula Owusu-Ekuful, the legislator for Ablekuma West, has been called for the Communications and Digitalisation Ministry.

Dr. Owusu Afriyie Akoto returns to the Food and Agriculture ministry, and the Member of Parliament for Manhyia, Dr. Matthew Opoku Prempeh will head to the Energy ministry.

Mr Kwaku Agyemang Manu has been maintained at the Health Ministry, and former deputy chief of staff at the Presidency, Mr Samuel Abdulai Jinapor goes to the Lands and Natural Resources ministry.

Mr Kwasi Amoako-Atta stays at the Roads and Highways ministry, whilst former deputy chief of staff, Mr Francis Asenso Boakye, who oined the eighth parliament as the member for Bantama, goes to the Works and Housing ministry.

President Akufo-Addo has kept Kwaku Ofori Asiamah back at the Transport ministry, and reassigned the for minister for Special Develooment Initiatives, Mavis Hawa Koomson to the Fisheries and Aquaculture Development ministry.

Cecilia Abena Dapaah retains her position at the Sanitation and Water Resources ministry, and the former Business Develooment minister, Dr Awal Mohammed has been sent to the ministry for Tourism, Arts and Culture.

Former Minister for procurement, Sarah Adwoa Safo goes to the Gender, Children and Social Protection ministry, and Ebenezer Kojo Kum, MP for Ahanta West has been nominated as Chieftaincy and Religious Affairs minister-designate.

Dr Kwaku Afriyie, a former minister of state at the Presidency has been nominated for the Environment, Science, Technology & Innovation ministry.

The President has retained Ignatius Baffuor Awuah, MP for Sunyani West and Mr Kojo Oppong Nkrumah at the Employment and Labour Relations and Information ministries respectively.

Mr Mustapha Yussif, MP for Yagaba Kubori and former Natioanl Service Coordinator, has been nominated to head the Youth and Sports ministry.

Mr Joseph Cudjoe, MP for Effia Constituency in the Western region, has been nominated for the newly-created Ministry for Public Enterprises.

Madam Freda Prempeh, Tano North legislator, has been nominated Minister of State for Works and Housing.

For the regional government, President Akufo-Addo has nominated Mr Goerge Boake for the Ahafo Region; retained Simon Osei-Mensah for the Ashanti Region, and named Justina Owusu-Banahene for the Bono region.

Mr Adu Gyan has been called for the Bono East region, whilst Madam Justina Marigold Assan has been nominated for the Central. region.

Former MP for Mpreaso, Seth Acheampong has been nominated for the Eastern region, and Henry Quartey, MP for Ayawaso Central and former Deputy National security minister has been named as the Greater Accra regional minister-designate.

He has reduced the number of ministries from 36 to 28. He is yet to furnish Parliament with his nominees for Deputy ministerial positions.