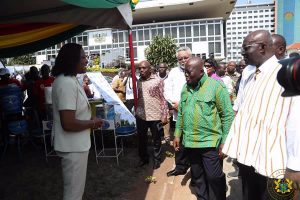 President Nana Akufo-Addo has launched the National Sanitation Campaign vowing to ensure it does not become a nine-day wonder.

Joined by former President Jerry Rawlings at the launch at the Banquet Hall of the State House Monday, the president outlined components of the campaign including an introduction of automated sweepers. 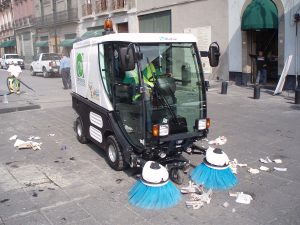 The government has also formed the National Sanitation Brigade, a re-branding of the feared town council in the 80’s.

“The personnel of this outfit would conduct regular visits to all offices to ensure that there is compliance and, where it so requires, take legal action against those infringing on the laws,” he explained.

In leading by example, President Akufo-Addo noted that every government department and agency, including the Seat of Government, is assigning two officers, to be designated Sanitation Marshal and Deputy Marshal, to oversee compliance of their outfits and their staff to the laid down by-laws with regard to sanitation in their respective offices.

Ministers, Chief Executives and Chief Directors of government departments and agencies will be held accountable for any lapses in the failure to comply with this directive, the President stressed.

He added that “the heads of departments have one week within which to identify and assign these officers. The Environmental Health and Sanitation Directorate must take steps to train these appointed officers on their new roles within one month of their appointment.”

On his call for Accra to be the cleanest city in Africa, President Akufo-Addo noted that “we will commence with the Government business district, which covers the Presidency, Parliament House, the Ministries, and the Courts. We will focus on the ceremonial and arterial roads going in and out of the city, to ensure that they are regularly cleaned up.”

He assured that “we shall take special care of the airport, major hotels and shopping malls/centres. Residential areas, and zongos, Central Business District, including the inner city periphery, markets and lorry parks, university campuses, schools and hospitals, and beaches and public places of entertainment and tourist centers are all going to elicit special attention.”

Touching on the value chain of sanitation in Accra, President Akufo-Addo noted that a rezoning the concessions, equipping of tri-cycle operators and construction of mini-transfer stations to facilitate the rapid collection and transportation of waste from the cities will be done.

“I will not be left out of this exercise. I will be directly involved, as I intend to monitor activities of the national campaign, to ensure that its goals are attained. I will review, on a quarterly basis, with the Minister for Monitoring and Evaluation, the performance of each Metropolitan, Municipal and District Assembly, and publish the results of the review,” he said.

The President continued, “This campaign is not going to be a nine-day wonder. It will run over the entire period of my mandate to ensure that Ghana is clean. I remain committed to this, and I am determined to ensure that the job is done.”

Nana Addo Dankwa Akufo-Addo, has stated that as waste is generated every day, Ghanaians have an obligation to keep the environment clean every day, indicating that the citizenry have to do so daily, and not on a monthly basis.

According to President Akufo-Addo, “EVERY DAY IS SANITATION DAY”. I recognize, however, that the government cannot do it alone. This is where I wish to call on all of us, especially our Chiefs and Queen Mothers, religious and opinion leaders, civil society organisations, private sector operators, to rise up to the challenge and help make a difference this time around.”

President Akufo-Addo announced at the campaign launch that Government has taken measures to acquire, for the Accra Metropolitan Area, three new sites to serve as integrated material recovery sites to address the issue of disposal of waste.

The three sites are located at Otinibi, Nsumia Number 3 in the Adoagyiri Municipality, and another in the Gbawe/Mallam area. Similar undertakings, he said, are being explored in the other regions to ensure that there are adequate, modern, engineered and environmentally acceptable sites for the processing of waste nationwide.

“I wish to stress that it is the policy of government to acquire and own these sites, in partnership with the private sector. Management service contracts of these sites will be awarded through a competitive tendering process. This policy will ensure fair play and avoid monopoly,” he added.

Government, the President noted, is also providing assistance to environmental service providers, who clean up the cities and towns.

“These measures include assisting them with access to credit facilities, and defining a tax regime that will enable them procure new and effective tools for their work… Modern, new state-of-the-art trucks and equipment are of the utmost necessity to deliver on this objective, and I intend to make it happen,” he assured.

Notwithstanding, the President stated that indiscipline has been a major cause of the unsanitary situation in most parts of the country, adding that it is not in the nature of Ghanaians to be dirty.

“We keep our immediate surroundings at our homes very clean. However, for one reason or the other, when we step out of these immediate surroundings, we seem to ignore all of these positive attitudes. Successive Ghanaian governments have tried to reverse this trend and inculcate a habit of greater discipline in the care of our surroundings. It has not succeeded. My government intends to walk a new path,” he added.