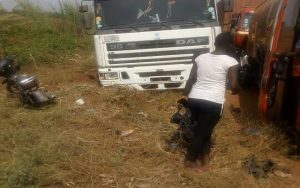 Clashes reportedly broke out last night between heavy truck drivers and armed Ghanaian security personnel stationed at Makango near Salaga in the Northern region to check and coordinate transport of goods and passengers across the White Volta following the closure of the Buipe and Yapei bridges by the Roads and Highways Minister this week.

The cause of the exchanges is still not known but many travellers said it was linked to the transport crisis that is crippling business activities and virtually separating the country on its Northern and southern fronts.

Gunfire was heard as soldiers and police struggle overnight to control several hundreds of passengers and vehicles including those travelling to the country’s Sahelean neighbours such as Burkina Faso, Mali and Niger locked up and stranded along the White Volta Lake that divides the Brong Ahafo town of Yeji and Northern region’s Makango.

The sudden shut down of the two vital bridges that connected Northern Ghana to the south and an explosion that knocked out power to the regional capital a day before have completely isolated and slowed business activities to Ghana’s largest region.

The Roads and Highways Minister, Dr. kwesi Amoako Atta on Tuesday, 21 November, 2017, with scanty notice to travellers ordered the closure of the two bridges and provided viable alternatives.

Following the closure, transport from Accra to Kumasi through Kintampo into the Northern region is now impossible and now has to be via Accra – Kumasi-Wenchi-Bamboi-Bole-Wa. Optionally, road users from the capital were to use Accra-Tema-Hohoe-Jasican-Nwanta-Oti Damanko-Bimbila- Yendi.

Transport services from the Ashanti region were now also impossible from Kumasi to Tamale through Kintampo-Yapei and now have to be from Accra-Kumasi-Mampong-Ejura- Atebubu-Yeji and crossing by ferry to Makango to Salaga.

The development has caused a never seen before traffic on all the alternative routes provided by the Highways department sparking varied responses and reactions from passengers, vehicles and goods owners.

On the Eastern corridor route, drivers have reported massive traffic caused by poor nature of the road especially from Jasican to Bimbila and several trucks are reportedly stuck and other reports of faulty vehicles slowing movement.
On the Central corridor, where tensions keep flaring, dozens of passengers and trucks with goods are on lockdown between Yeji and Makango for several days as only one ferry is currently operational on the waters.

Drivers of the heavy trucks, some travelling to neighbouring countries and carrying perishable goods accused the security guards of allowing the ferry to transport only passenger vehicles and protested, according a traveller stranded at Makango.

Several passengers behind the river waiting to be ferried said the Armed forces in desperate efforts to control the operation and ensure the passage fired warning shots and the shots were returned by an angry long truck driver travelling to Burkina Faso.

Assembly member for Makango, Osman Abdul Gaani speaking to Starr News said he could not confirm the gunfire but added tensions were escalating in the standoff.

He said the drivers felt cheated by the decision of the security forces to allow passage to only vehicles carrying passengers leaving the goods they were carrying to damage.

Mr. Gaani called for more ferry to be deployed to the area to prevent further escalation of the situation.

This is the third time the two bridges have been closed and in just from February to this month, government has spent nearly 5billion cedis in rehabilitation works.

In February, the road Minister inspected a temporary shutdown of the Buipe Bridge for maintenance works at a cost of GH449, 000 whiles in May; the Yapei Bridge was also closed for similar purpose at GH420, 000.

And just six months later, the bridges are being closed down for another repair works, this time, at four million Ghana cedis.
Source StarrFMonline.com