‘They are martyrs for democracy’ 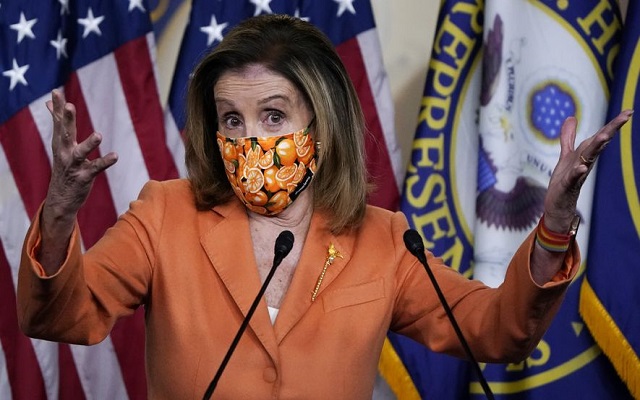 A day after Democrats presented chilling new video footage of the Jan. 6 attack on the Capitol at former President Donald Trump’s impeachment trial, House Speaker Nancy Pelosi announced on Thursday that she will introduce a resolution to give the Congressional Gold Medal — Congress’s highest civilian honor — to Capitol Police officers who protected lawmakers during the deadly siege.

At her weekly press briefing on Capitol Hill, Pelosi said the videos introduced Wednesday at Trump’s trial showed “the extraordinary valor of the Capitol Police, who risked and gave their lives to save our Capitol, our democracy, our lives.”
Pelosi lauded Capitol Police Officer Eugene Goodman, who was seen in the new footage diverting the rioters from entering the Senate chamber and alerting Sen. Mitt Romney, who was inadvertently walking toward them.

In other videos played at the trial, the rioters were seen roaming the hallways of Congress searching for Pelosi’s office, calling out, “Oh, Naaaaaaancy!”

In a letter, Pelosi urged other members of Congress to sign on to her resolution that would grant the officers who fought back the mob on Jan. 6 the Congressional Gold Medal.

“That day, those men and women risked and gave their lives to save ours,” she wrote. “The outstanding heroism and patriotism of our heroes demand our deepest appreciation.”