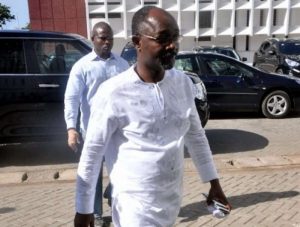 The Supreme Court has set Tuesday, November 28, 2017, to rule on the motion filed by embattled businessman Alfred Agbesi Woyome.

Lawyers for the National Democratic Congress (NDC) financier last week filed the motion to halt efforts by the state to retrieve the GH¢51.2 million he fraudulently received from the state as judgement debt.

The motion seeks to stay the proceedings at the Supreme Court as well as halt moves by the state to evaluate his properties until a determination of another related case being heard at the African Court on Human and People’s Right in Arusha, Tanzania.

A five-member panel of judges comprising Justices Jones Dotse, Anin Yeboah, Vida Akoto Bamfo, A.A Benin and Yaw Appau – to determine the merits of the motion was set up.

Before the court yesterday, Mr. Woyome’s lawyer, Osarfo Buabeng, prayed the apex court to stay the execution since a similar matter was being heard at the African court.

According to him, the decision of the Supreme Court to allow the state to continue with the process of retrieving the money would invariably affect the decision of the African court, which he noted, would infringe on the human rights of the businessman.

Deputy Attorney General George Dame, however, objected to the claims, arguing that the application filed by Mr. Woyome’s lawyers does not provide any grounds to justify that the decision of the Supreme Court to grant the state the go-ahead to retrieve the money would infringe on his human right.

According to him, for Woyome and his lawyers to have gone to the African Court on Human and People’s Rights to contend the decision of the Supreme Court is an affront to the 1992 Constitution of Ghana.

Mr. Dame therefore prayed the court to strike out the motion to stay execution since it does not have any merits.

In the heat of the arguments by Woyome’s lawyer and the deputy attorney general, Justice Anin Yeboah, raised the issue of the constitutionality of the matter before the court, stating that it (matter) was purely an invocation of the constitution and wondered how the decision of the African court would have any bearing on the Supreme Court’s decision.

Justice Benin also maintained that lawyers for the embattled businessman were failing to see the connection between human right and the constitutionality of the case.

Justice Yaw Appau, who was not convinced about how the action by the state to retrieve the money is an affront on Mr. Woyome’s rights, asked his (Woyome’s) lawyers to explain how his rights were being violated.

Lawyer Buabeng could, however, not give the instances in which his client’s rights were being trampled upon, saying he did not want to talk about it in the court.

The panel will rule on the motion on November 28, 2017.
Source: dailyguideafrica.com