Inside the ugly transition at the Pentagon 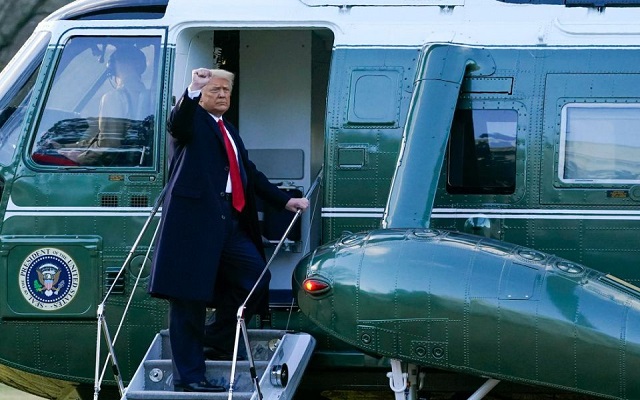 President Donald Trump gestures as he boards Marine One on the South Lawn of the White House,

The Pentagon blocked members of President Joe Biden’s incoming administration from gaining access to critical information about current operations, including the troop drawdown in Afghanistan, upcoming special operations missions in Africa and the Covid-19 vaccine distribution program, according to new details provided by transition and defense officials.

The effort to obstruct the Biden team, led by senior White House appointees at the Pentagon, is unprecedented in modern presidential transitions and will hobble the new administration on key national security matters as it takes over positions in the Defense Department on Wednesday, the officials said.

Biden openly decried the treatment his aides were receiving at the Pentagon in December, calling it “nothing short, in my view, of irresponsibility” after meetings were canceled ahead of Christmas. He said his people were denied information on the SolarWinds hack, and said his team “needs a clear picture of our force posture around the world and our operations to deter our enemies.”

But people involved with the transition, both on the Biden team and the Pentagon side, gave POLITICO a more detailed picture of what was denied, saying briefings on pressing defense matters never happened, were delayed to the last minute, or were controlled by overbearing minders from the Trump administration’s side.

“Defense has traditionally been a bipartisan business between and among professionals, and this is terrible optics for those who want to copy this pettiness in the future,” said Mackenzie Eaglen, a fellow at the conservative American Enterprise Institute. The effort to block the transition from key national security information is “useless, poor form, and horrible precedent.”

This story is based on conversations with 10 Pentagon and Biden officials involved in the transition, most of whom spoke on condition of anonymity to discuss sensitive conversations.

Tensions between the Pentagon and the Biden agency landing team emerged almost the moment the General Services Administration authorized the transition to begin in late November after an initial delay following the election. While the military side of the house — the Joint Staff and the geographic combatant commanders — were more cooperative, the civilian side set up roadblocks at every turn.

“They really should not be allowed to get away with this. It’s just completely irresponsible and indefensible,” said one transition official. “To play politics with the country’s national security is just really unacceptable.”

Outgoing acting Defense Secretary Chris Miller has maintained publicly that he is committed to ensuring a smooth transfer of power, and Defense Department officials say the Pentagon has worked hard to complete the Biden team’s requests for information and interviews in challenging conditions due to the pandemic and a hyper-partisan environment.

Pentagon spokesperson Sue Gough said it is “understandable” for there to be limits on what sensitive and classified information the department can provide to the incoming team, including related to future military operations. She also defended the presence of career civilian counsel as “observers” during meetings with the Biden team, saying the lawyers’ participation ensures that the information is “properly handled.”

Transition “personnel are not government employees and thus limited to some extent on what they can receive,” Gough said. “Membership on a transition team alone is not a license to access confidential, privileged or classified government information.”

But people with the transition said the outgoing team’s conduct went far beyond the norm and pointed to loyalists installed by the White House as the main reason for the obstruction. Pentagon officials under President Donald Trump refused to provide information about current operations, particularly in the special operations realm, because they are “predecisional.” That means the Biden team now has limited visibility into key operational issues, including what counter terrorism missions are in the works.

In one incident, the Pentagon abruptly canceled the transition team’s meeting with Gen. Scott Miller, the commander of U.S. forces in Afghanistan, which had been scheduled for just before Christmas. At the time, the acting defense secretary said both teams had agreed to reschedule all non-Covid related meetings until after the new year, but Biden officials publicly denied that claim.

The draw down in Afghanistan, where American troops are expected to leave the country this spring under a deal between the Trump administration and the Taliban, is one of the most pressing issues Biden’s national security team will have to confront in his young presidency.

The team was eventually able to speak with the general in January. But with the Trump administration down to 2,500 troops in Afghanistan and on a path to reach zero by May, “having a multiple-week delay in gaining access to Gen. Miller was not good,” the first transition official said.

Another area where the transition felt they did not have adequate access was Operation Warp Speed, the Trump administration’s effort to develop and distribute Covid-19 vaccines. The Pentagon initially rebuffed the transition’s request to meet with Gen. Gustave Perna, Warp Speed’s chief operating officer.

Perna was present at a meeting between the Pentagon and Health and Human Services transition teams in mid-December, but he did not answer any questions. It wasn’t until last week that the DoD transition team got to meet with Perna in a smaller setting.

Transition officials said the delay in getting answers about Warp Speed will hamper the Biden administration’s plan to dramatically scale up the nation’s vaccination distribution effort over the next three months.

Gough pushed back on the characterization that DoD did not cooperate on Warp Speed, noting that the department has held 64 interviews or briefings with the Biden transition team where Covid-19 was on the agenda or a was major discussion point, and completed 59 Covid-related requests for information.

Overall, Gough said the department as of Tuesday had sent the Biden team 277 responses to requests for information.

But across the department, even when the transition team did meet with DoD officials, both civilian and military, they were often tight-lipped, as if they were given explicit guidance about what they could and could not talk about. Those suspicions were confirmed when the first transition official bumped into a “very high-ranking” military official a week after their meeting, and the officer apologized for his clipped answers.

“We were alone, and he told me ‘I’m sorry I wasn’t able to tell you more, but I was given very strict instructions,’” the transition official said.

In another interview with a combatant commander, the Biden team asked detailed questions about pressing national security matters, and received “very vanilla answers.”

Some of this reticence may have been due to the fact that in nearly every transition meeting, “minders” from the Defense Department General Counsel’s office were present and frequently cut off the civilian Pentagon officials, citing “predecisional operational matters.”
In one recent meeting, retired Brig. Gen. Anthony Tata, who served as acting Pentagon policy chief until last week, frequently looked over at the general counsel representative as if to ask for permission to discuss a particular topic.

Meanwhile, every request for information the Biden team filed had to be reviewed by the general counsel’s office, and many were scrubbed of all useful information. Many requests were never answered, and the ones that did come back were thoroughly “sanitized.”

The Biden team had particularly poor visibility into the special operations and low-intensity conflict portfolio. While Trump political appointees in that office were allowed to meet with the transition, many of the career officials have been kept “at arm’s length,” said one defense official, calling the effort unprecedented.

“We have not been sidelined like this,” the person said.

The first transition official echoed those concerns, saying the team met with “some chief of staff who seemed very young and seemed quite new in his portfolio.” The person recalled asking detailed questions about changes the Trump administration made to the process of approving a mission — under former President Barack Obama, most missions had to be approved by the White House — but could not get clear answers.

The team is particularly concerned that they do not have sufficient visibility into what’s going on in Africa, whether it’s covert special operations missions across the continent or Trump’s withdrawal from Somalia.

The Biden team was also frustrated by the lack of cooperation around the upcoming budget request, a concern Biden himself cited in December and that a second transition official called “laughable.” In particular, the Biden team struggled to get details on the Trump administration’s efforts to siphon resources from military construction projects to the border wall, and funding for the Covid-19 response.

Mike McCord, the transition’s lead for Pentagon budget issues, was finally able to meet with representatives from the armed services to discuss the budget request last week, but the delay until days away from inauguration caused heartburn.

The Pentagon has also rebuffed the transition’s efforts to gain insight into a high-profile arms deal with the United Arab Emirates for the F-35, America’s most advanced fighter jet. This prevented the team from understanding key details about how sensitive information about the jet would be safeguarded, and what concerns have been raised by Israel, which also operates its own F-35s and initially objected to the deal.

Some Trump defense officials called the Biden team’s claims of obstructionism “overblown,” blaming their frustrations on the delay in certifying the election, reduced manning due to Covid-19 restrictions, and a larger-than-usual number of requests for information and interviews from the transition team.

“If anything, I think the incoming folks are overwhelming the department (political and careers alike) with requests,” said a second defense official.

As of Friday, the transition team had met with more than 400 Defense Department political appointees and over 180 career officials, said a third defense official, noting that the department has not “denied the [agency review] team anyone they’ve asked for.”

A fourth defense official who is departing with the Trump team and took part in some of the transition planning said he “saw no effort to conceal anything” from the Biden team.

But he said he believes that some of the appointees to top jobs in the waning months of the administration did not have the best interests of the institution in mind and were obsessed with political vendettas.

Trump, he said, “hired all the wrong people. And he paid a price for it. There wasn’t much we could do.”

And the acrimony has gone both ways. At the last minute, the Biden team denied Miller office space and resources for his transition out of the role, a courtesy typically provided to the outgoing team. POLITICO confirmed the move, which was first reported by Bloomberg.

The transition elected not to extend Miller that particular “perk” given his acting role and the reduced capacity in the Pentagon due to the pandemic, said another transition official, noting that retired Gen. Lloyd Austin, the nominee to be defense secretary, has also chosen to do all of his transition planning from home for those reasons.

One area where the Biden team said the department has been cooperative was in security surrounding the inauguration, primarily because the Pentagon’s role in the effort has been led by the military side.

In particular, Deputy Defense Secretary David Norquist, who Biden has tapped to serve as acting defense secretary until Austin is confirmed, has been helpful.

Overall, the first transition official said they would give Trump’s Pentagon team a “C- or D+” grade for their cooperation.

“Ultimately the level of information that we were given access to was inadequate, I mean just grossly inadequate, particularly in the context of a historically unprecedented set of challenges that the nation is facing,” the person said. “It’s really quite shocking.”
Source Lara Seligman and Bryan Bender