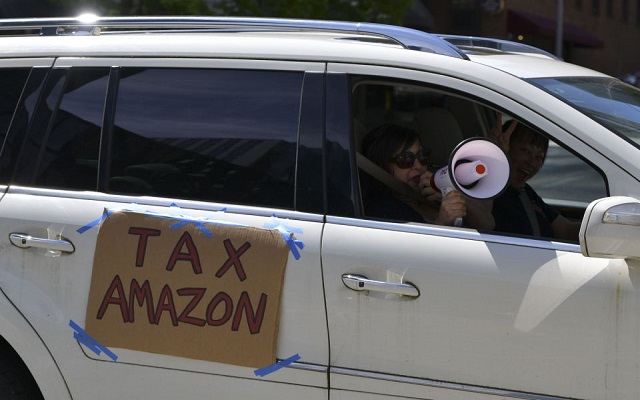 It’s been dubbed the “Amazon tax,” a proposal floated by President Joe Biden to impose a minimum tax rate of 15% on corporations with $100 million in profits that pay little or no income tax. It could present more of a challenge than Biden’s other tax plans, says one Washington policy analyst.

“Some of these corporations who have done a good job of avoiding anywhere close to the statutory rate could see a very different tax structure if what is proposed gets implemented,” said Ed Mills, managing director and Washington policy analyst at Raymond James.

The plan also includes a proposal to raise the overall statutory tax rate to 28% from 21%, but “I don’t think there’s a lot of folks that will lose a lot of sleep about how that could impact earnings,” Mills told Yahoo Finance Live.

Using tax breaks and credits, Amazon avoided paying taxes for 2017 and 2018 before ponying up $162 million for 2019 — an effective rate of 12%.
Economists on both sides of the aisle have been critical of Biden’s proposal, though, in part because it adds a layer of complexity to an already labyrinthine tax code.

Mills said Democrats’ strategy in getting it passed would be messaging around fairness, and using proceeds from the tax to improve worker treatment, for example with paid sick leave or a child tax credit. They’ll say, “This isn’t punitive, this is the ‘fair’ way of doing things,” he said.

To be sure, tax proposals aren’t on the docket imminently, but it’s a potential profit risk “on the horizon,” Mills said.
Julie Hyman·Anchor

Previous Post85 Ministers is still too high for a country like Ghana. Next PostRight to Dream academy appoints first Ghanaian MD