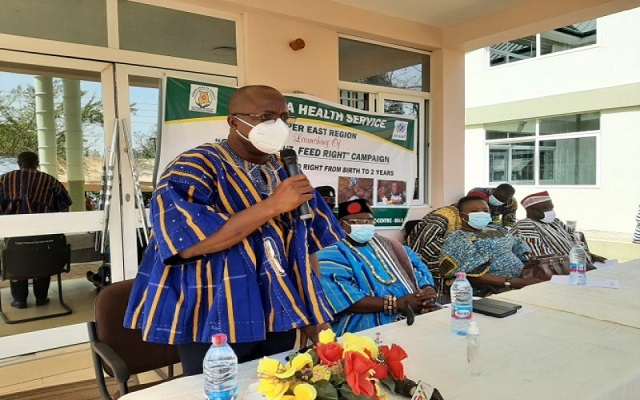 Dr Emmanuel Kofi Dzotsi, the Upper East Regional Director of the Ghana Health Service (GHS) says about 44 percent of mothers of new-born babies do not put them to breastfeed within the first one hour after birth.
He said “Recent reports have shown that only 56 percent of children in the Upper East Region are put to breast milk immediately they are born for the first six months and 73.9 percent are exclusively breastfed.

“We expect that every child, when born, should be put to breast milk. I wish to encourage mothers to ensure that the Region achieves 100 percent because, with the 56 percent, we are at the lower level,” he said.

Dr Dzotsi said this when he addressed stakeholders at the launch of the “Start right, feed right from birth to two years” campaign in Bolgatanga, the Regional capital.

The campaign, which is a collaboration between the GHS and UNICEF, is intended to create awareness on the need to start right and sustain early breastfeeding practices to enable both mother and baby to derive the full benefits of exclusive breastfeeding.
Dr Dzotsi emphasized that the sole breastfeeding practice for babies from birth to six months, was the only way their nutrition could be improved, “Most mothers give children less than six months old, all manner of things in addition to breast milk.

“We need to understand that breast milk is a balanced diet which has adequate water, nutrients and all that the child needs. There is no need to add foods, the child is satisfied with the breast milk within the six months,” the Regional Director said.

Dr Dzotsi said the campaign would include the provision of skilled nutrition counselling and support at Child Welfare Clinics and advocacy actions to galvanise momentum to improve breastfeeding and education on complementary feeding in the Region through the media, community engagements among others.

He said the GHS with support from the United Nations Agencies including UNICEF, Food and Agriculture Organisation, the World Health Organisation, World Food Programme and other partners would work to support mothers to breastfeed and provide nutrient-rich foods for children who start feeding on other foods to address the issue of stunting, wasting and deaths.

Madam Tangoba Abayage, the Outgoing Upper East Regional Minister who launched the campaign, said the Chiefs and people of the Region were happy that UNICEF and the United Nations Agencies decided to support the campaign in the Region.
She said the decision would allow the Region to disseminate the right information to mothers about the benefits and management of breastfeeding for their uptake.

She suggested that the campaign be planned to elicit the support of families, the healthcare system and the broader society by fostering the formation of breastfeeding support groups.

She said the challenge posed by the COVID-19 pandemic, including the destruction of social and economic systems and the nutritional levels of lactating mothers and their families would adversely affect the quantity, quality and frequency of exclusive breastfeeding.

“We, therefore, have to bring our skills and knowledge to bear in making the most out of the challenge in the implementation of the new campaign,” Madam Abayage said.

Participants at the end of the programme, inspected legumes and nuts, cereals, grains, fruits and vegetables, including soybeans, egusi, Neri, beans, maize, dawadawa okra, banana, mangoes, oranges among others that were on display as sources of nutrients that could boost immunity.