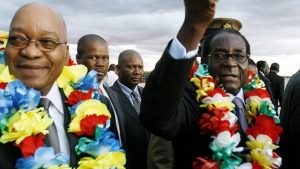 The silence of South Africa’s governing African National Congress (ANC), especially in the hours immediately after the fall of Zimbabwe’s President Robert Mugabe, was deafening.

It showed the enormous psychological influence the one-time revolutionary wielded over the party – and it was so stunned by his humiliating exit that it was unable to respond to the momentous developments in the neighbouring state.

When the ANC finally commented almost 24 hours later, it applauded the military for ensuring a “smooth transition” and said it continued to respect Mr Mugabe’s role as a “freedom fighter”.

In contrast, the main opposition Democratic Alliance (DA) reacted swiftly, capturing the mood of many black and white South Africans when it said: “This is a victory for the people of Zimbabwe who have suffered greatly under the latter years of Mugabe’s reign. The story of Robert Mugabe is not a unique one, and is all too familiar on our continent.

“A once liberator of his people, Mugabe brought division, instability, and economic ruin to Zimbabwe as he made the unfortunate transition from liberator to dictator.”

But this applies not only to Mr Mugabe, but to also to the party he led Zanu-PF, which has dominated Zimbabwe since sweeping to power at independence in 1980.

As Zimbabwean opposition politician David Coltart poignantly remarked: “We have removed a tyrant but not yet a tyranny”.

He was referring to the fact that one faction of Zanu-PF, led by sacked Vice-President Emmerson Mnangagwa, has ousted another, which had coalesced around Mr Mugabe’s and his wife Grace.

Like Zanu-PF, the ANC, which also took power at the end of minority rule, is wracked by corruption and violence, as rival factions fight to gain positions in government, primarily to enrich themselves rather than serve the nation.