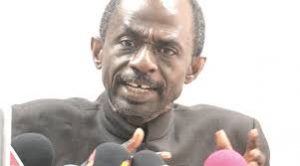 General Secretary of the National Democratic Congress (NDC), Mr. Johnson Asiedu Nketia, has said that Anas’ Number 12 exposé which was premiered on Wednesday, June 6th is a recipe for coup d’etat.

According to him, various political parties in the country should rise and purge themselves else members of the public will see them as corrupt and evil.

“Look, these are what brings about coup d’etats and as a country we should be worried and find a solution to these issues raised,” he said.

The President of the Ghana Football Association (GFA), Kwesi Nyantakyi had a grand plan of ruling Ghana with money, excerpts from the much-anticipated Anas expose’ has revealed.

Mr Kwesi Nyantakyi in a meeting with undercover agents who posed as ‘investors’, disclosed how from small beginnings, he and his ‘investor’ friends could ‘take over’ Ghana with their money.

“You can start with something small in your own discretion, then when you get the contract; the big big contract, we can go back and give them more money, then we will take over the whole country,” Mr. Nyantakyi told the ‘investors’ in the video released by Anas Aremeyaw Anas.

The video which captures the GFA President, is another incriminating evidence confirming the allegations against him.

Speaking on an Accra radio station, the NDC scribe who expressed profound worry after watching the exposé at the Accra International Conference Center, added that he was shocked to the bone about some of the things he heard from the President of the Ghana Football Association, Mr. Kwesi Nyantakyi.

However, Acting General Secretary of the NPP, Mr. John Boadu says Ghanaians should be clam and not be worried about what they are seeing from Anas’ video.

The NPP National Organizer rubbished some claims made by Mr. Kwesi Nyantakyi about the President and the NPP government in the documentary.

The exposé “focused on local leagues, referees, club owners, coaches and the higher reaches of the football administration in Ghana, as well as its connection to continental and global football”.

The documentary also explained why the senior national team, the Black Stars, missed out on the African Nations Cup and the Russia 2018 World Cup and why the local league is in tatters, where the men and women responsible would be named and shamed.

Anas says it is his expectation that the documentary will kick-start an active national conversation on football “and give well-meaning Ghanaians an opportunity to help build a system that is robust”.