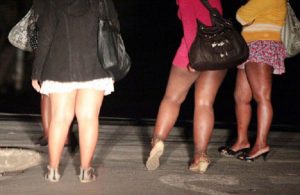 The Youth of Kpaguri a suburb of Wa in the Upper West Region on Saturday evening chased out women believed to be operating as prostitutes in the area.

Properties including beds, cooking utensils, food items and standing funds have all been destroyed.

While the youth set the alleged prostitutes’ fence wall ablaze, they identify the victims who are on the run for their lives.

The incident according to eyewitnesses was characterized by what the community sees as a treat to the moral upbringing among children in the area.

Even though he wouldn’t want his name to be mentioned, he said the residents of the area have had it tough with the alleged prostitutes and the house owner for asking the house owner to relocate them.

He said the case was reported at the Wa Naa’s palace which they was still no solution to the problem and that the Tendaamba considers that area as a sacred place, therefore, cannot allow prostitution there.

Even though the case was later reported to the Upper West Regional police for investigation, the youth have decided to take the law into their hands by hiding under the dark to chase out the alleged prostitutes and also destroyed all their belongings.

The incident happened around 7pm on Saturday.