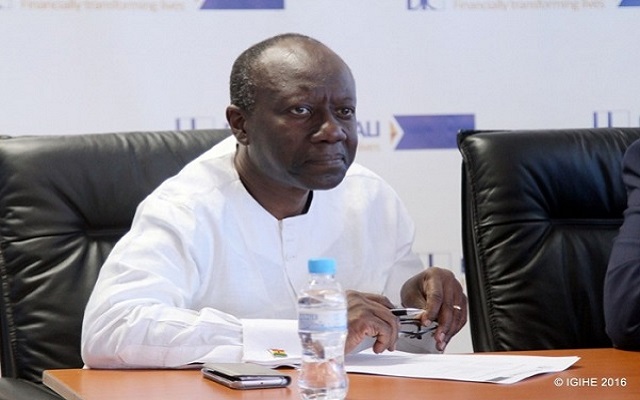 Ken Ofori-Atta, Minister of Finance has asserted that the cedi has made great strides towards recovery on the back of the successful issue of the US$3 billion Eurobond and the completion of the IMF review, which restored confidence in the economy.

He said currently, the cedi witnessed substantial gains and with the measures put in place, adding that with the existing sound economic fundamentals, they anticipated the stability of the cedi going forward.

“Indeed, the cedi has appreciated by 5.12 percent in March 2019 alone as against a depreciation of 2.7 percent in the same period last year” added.

Mr Ofori-Atta made the statement when he addressed parliament on some key events that had occurred recently on the economy for the first Quarter of 2019.

Some of the events included; the formal completion of the Extended Credit Facility programme with the IMF, the US$3 billion Eurobond Issuance, the recent development on the foreign exchange market and the cedi as well as the visit of the World Bank Vice President for Africa, Dr Hafez Ghanem.

Mr Ofori-Atta also stated that the depreciation of the Ghanaian currency was not due to weak economic fundamentals, but rather a combination of structural rigidities and apparent speculative behaviour of portfolio investors and market participants.

“It is also noteworthy that while this is a challenge, the cedi has however performed better over the past two years than when compared specifically to 2012 to 2016”.

Mr Ofori-Atta further explained that the cedi suffered some turbulence despite the strong economic fundamentals and improvement in the country’s balance of payments, which the government achieved in the last two years.

“We have done a lot of work to ensure that the economic fundamentals are robust and able to support economic growth and transformation” he said.

Mr Ofori-Atta also stated that current progress on the economy, sustained GDP growth and economic transformation would eventually ensure that the currency was stable over the medium term.

He said the Bank of Ghana would remain vigilant in the short term to build adequate revere buffers and promote market discipline in the foreign exchange market over the medium term. “The government will ensure that we have a transformed economy that will strengthen our trade, current and capital accounts”.

Mr Fiifi Kwetey, Member of Parliament (MP) for Ketu South in his contribution refuted claims by the Finance Minister, Ken Ofori-Atta that the NDC government signed up for a three-year IMF Extended Credit Facility in 2015 to fill a $930m gaping hole in the economy.

He argued that the figure put out by the Finance Minister was too measly and paltry to have compelled the NDC government to invite an IMF bail-out.

He stated that the NDC administration under Mahama had spent much more on infrastructure to consider a lack of $930m great enough for an IMF bail-out.

He said the attempt by the NPP government to claim a crown of “economic messiahship” as Ghana leaves the IMF programme in 2019 was deceptive.

He said history did not give the NPP that tittle because shortly after leaving the IMF in 2006, the NPP government under President John Kufuor, suspended fiscal restraint and embarked on reckless spending.

He said despite a budget deficit target of about 4 percent in 2008, the NPP government hit a 15 percent deficit, an 11 percent miss, which he described as the highest in history.

“Your history shows you have gone out of IMF before, but the mess you left in two short years after completion was absolutely terrible,” he added.