Denmark apologizes to Ghana for role in slave trade 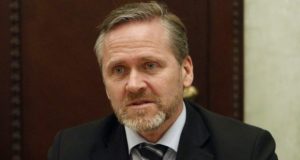 The Danish government has apologized to Ghana for its role in the slave trade which saw an estimated 12 million Africans including Ghanaians shipped across the Atlantic.

The Atlantic slave trade involved the forced transportation by slave traders of enslaved Africans, mainly from Africa to the Americas between the 16th to the 19th centuries.

The slaves were treated under the most inhumane conditions, and scars of the slave trade remain today with racial tension persisting in some western countries.

The Danish Foreign Minister, Anders Samuelson, making the pronouncement at the Flagstaff House, said Denmark was ashamed of its part in the slave trade.

“…I also take the opportunity to bring up a more distant shared history. We share a dark history of slave trade – shameful and unforgivable part of Danish history. Nothing can justify the exploitation of men, women and children in which Denmark took part.”

Anders Samuelson is part of the delegation of Queen of Denmark, Margrethe II, who is the first Danish Monarch to Visit Ghana. 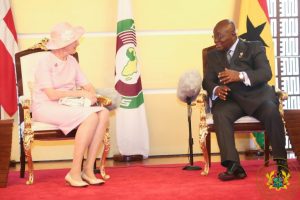 Denmark’s involvement in the then-Gold Coast begun on April 20, 1663, when it seized the Christiansborg Fort (Osu Castle) and Carlsborg Fort (Cape Castle), as it completed the annexation of Swedish Gold Coast settlements.

A number of trading stations and forts were built by the Danes during their time in Ghana, several of which are in ruins today.

The Osu Castle was noted as the base for Danish power in West Africa, and the centre for slave trade to the Danish West Indies.

In 1807, Denmark’s African business partners were overcome by the Akan resistance which led to the abandonment of all trading stations.

Denmark’s involvement in the then-Gold Coast ended following the Norwegian Declaration of Independence in 1814.

Denmark’s five Danish Gold Coast Territorial Settlements and forts of the Kingdom of Denmark were sold to the United Kingdom and were incorporated into the British Gold Coast in 1850.

Years after the dark days of slavery,  Denmark through its DANIDA Agency, has supported Ghana in many sectors of the economy.

However, Denmark has now decided to move from aid to trade, a vision that falls in line with President Akufo-Addo’s Ghana’s  beyond aid agenda.

Ghana and Denmark have enjoyed strong diplomatic and commercial ties over the years, and this visit by the Queen, joined by representatives of Danish companies and business organizations, is further aimed at strengthening same.

With Ghana’s graduation to a middle-income country and the prospects of sustainable economic growth, Denmark is gradually transitioning from development aid to trade cooperation, in line with the vision of the Government of Ghana.

Facts about Ghana and Danish exports:

•The Danish International Development Assistance (Danida) has been active in Ghana since 1989, but the Danish development aid will now be phased out and cease entirely in 2020, as Ghana became a middle income country in 2011.