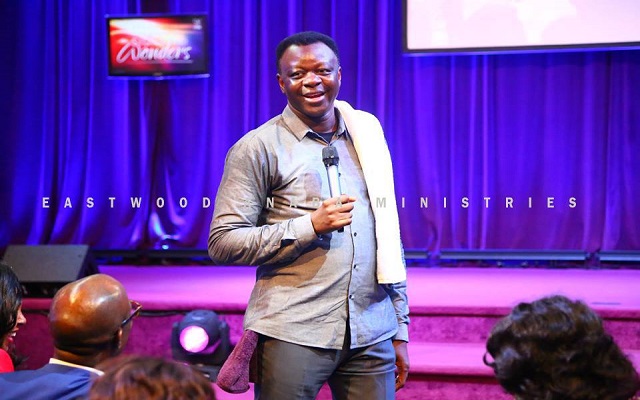 ‘Gawo’ is a normally a word used to refer to people who emigrate into the southern part of Ghana who trade in petroleum products.

He said he can only admire the gift of his colleagues ministers of the Gospel and wish he was like them but had his own peculiar ability which he loves.

“But me, God made me ‘Gawo’. Kingdom ‘Gawo’, because me I’m from the north so I’m ‘Gawo’. I call myself a Zoomlion preacher,” he noted.

Reverend Eastwood Anaba was giving a sermon in which he was appreciating the various gifts of some men of God. He added some of his colleagues have abilities that are admirable and he wished he was like them.

He wondered why sometimes some men of God tend to question the gifts of other pastors. He continued that, in some situations, some people asks why would a man of God prophesy to someone including mentioning phone numbers. “I don’t criticise such things because if I had that ability, I would have been glad. The way Prophet Agyemang and Jenkins do their own, I wish I had it,” he stated.

He added that, there was a time Prophet Nana Osei came to his church and prophesied to his sister to his amazement. “I was sitting right there and I know everything he is saying about my sister is true. He didn’t know her from Adam, when he hit the last part of the prophesy, I got up and said, Nana I gift my church to you and I’m gone.”

According to him, when he watches Archbishop Duncan-Williams preaches and the way he moves and the way he prays, “I wish I could do that for three minutes, but when I start then I fumble”. In addition sometimes the grammar the Archbishop uses in his prayer can easily move angels and in his view such prayers can kill Satan. He said this to the applause and laughter of the congregation.

He continued that, sometimes he watches the miracles by Bishop Agyin Asare how he opens the eyes of the blind. “The man doesn’t preach and sweat like I do but all he does, is to say, if there is any blind or deaf person among the congregants, just rise, he prays for less than three minutes and ends with ‘in the name of Jesus’ and it is done.”

But, he added that, when I watch such things, it’s appealing to me and wish I could do same.

Reverend Anaba further explained that when he looks at the gifts of some of his colleagues, he just admire them. “I look at Bishop Dag Heward-Mills and I see all these trailers, they are going for crusade and I only marvel and ask, God when I’m I also going to drive the least of those cars?”

Reverend Eastwood Anaba was speaking in a sermon monitored on Facebook posted by F. A. Boateng.