Fuse ODG and Ed Sheeran wrote ‘Boa Me’ during the same sessions which created ‘Bibia Be Ye Ye’ from Sheeran’s all-conquering ‘÷’ album. They collaborated after Fuse extended an open-ended invitation for Sheeran to “soak in the proper old school traditional music vibe” in Ghana.
Fuse believes that it offered a snapshot of the real Africa and that it encouraged Sheeran to connect with a culture that he continues to support.
Performed primarily in the Ghanaian Twi dialect, ‘Boa Me’ sizzles with the traits that make Afrobeats standout – it’s uplifting, energetic and immediately fun: music which puts a smile on your face and a spring in your step.

The song was written shortly after Fuse had shown Sheeran around a primary school in Akosombo which he’d built along with the Wood World Missions charity.
The uplifting video for the track features footage which shows Fuse and Sheeran revisiting the school to perform ‘Boa Me’ to its pupils. It also features various scenes which show the duo and Mugeez enjoying everything about Ghana from its stunning natural scenery to its nightlife.
“’Boa Me’ means help me, and the song is about giving a helping hand to your brother or sister,” explains Fuse. “It’s just done in a really fun way. We had the idea after we visited the school, and we were having a conversation about how to raise money to contribute to the secondary school that we’re building in the area.”
“It was the most fun experience,” adds Ed Sheeran. “Being in the studio with someone like Fuse and all of his mates, it’s just a party the whole time. That’s probably the most fun I’ve had making a song.”

Born in London and raised in both Ghana and the UK, Fuse ODG was recently honoured with two high profile appointments. President Akufo-Addo appointed Fuse as the brand ambassador for cocoa in Ghana, while the nation’s Tourism, Arts and Culture Minister, Hon. Madam Catherine Afeku, appointed him as a tourism ambassador.
Fuse ODG opened the floodgates for the Afrobeats sound with his debut album ‘T.I.N.A. (This Is New Africa)’. The album featured huge hit collaborations with a plethora of stars from all over the world including the Platinum-certified ‘Dangerous Love’ with Sean Paul and ‘Antenna’ with Wyclef Jean. 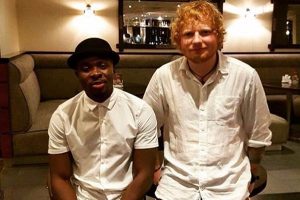 The album cemented Fuse’s status as the pioneer of the Afrobeats sound. Mixing the irresistible rhythms of the original Afrobeat genre with the rambunctious production of grime and a bold pop sensibility, Afrobeats is a sound that feels at home in London as it does in Lagos or Accra. It’s a genre that’s now gaining traction in the mainstream with Diplo, Major Lazer and Beyoncé all releasing music that reflects its energy and vibe.
It also allowed Fuse to commence a dialogue to present Africa as it really is: a vibrant, scenic and community-orientated continent full of opportunities that’s a world away from how it’s portrayed by the mainstream media. Assisted by the multiple hit singles from the ‘T.I.N.A.’ album, Fuse ignited debates in some of the world’s most prestigious universities and raised awareness all over the globe.
Fuse’s forthcoming new album ‘New Africa Nation (NANA)’ aims to build upon those achievements by creating tangible results. Fuse is passionately engaged in helping African people to spread word of their culture by prospering in creative endeavours that include a record label, a music festival, a fashion brand and children’s toys.
By connecting with the international community, Fuse believes that those cultural roots will inspire investment and tourism from the world-at-large.
Source: Myjoyonline.com