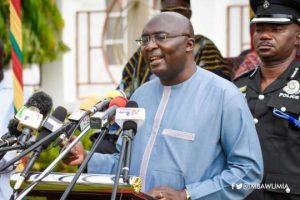 Vice President, Mahamudu Bawumia, has disclosed the government will soon begin recruitment of 3,000 Arabic teachers to aid in developing global mindedness and cultural diversity in the citizenry.

He said the Ministry of Inner City and Zongo Development had been mandated to undertake the recruitment exercise.

Vice President Bawumia disclosed this at the Annual Celebration of the Birth of Prophet Mohammed at Fadama, in Accra, on Saturday.

He said the Government had started fulfilling some of the campaign promises including the implementation of teacher and nurses’ trainee allowances and Free Senior High School Policy.

The Vice President said the government would launch a three-year programme to construct bridges, interchanges and a total of 1,500 kilometres of roads across the country to enhance agriculture productivity. 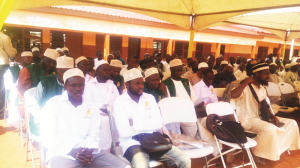 He added that rail lines from Accra to Paga and Kumasi and Takoradi to Kumasi would begin next year to boost government’s industrial transformation agenda.

Vice President Bawumia said the “One Million, One Constituency” initiative would also commence next year to ensure uniform development across the country.

He said government needed peace to implement those policies and urged Muslims to live in unity and harmony with one another and tolerate other religious members’ views.

He commended the Chief Imam, Sheikh Nuhu Shaributu, for being a “walking example” of the principles and values of Prophet Mohammed in view of his sincerity and tolerance and urged all Muslims to emulate those attributes.

Previous PostPhotos: Mahama brings back missing smiles on faces of mourners Next PostJohn Dumelo gets cake prophesying he will be president