I was very angry for days over Ayariga’s bribery claims 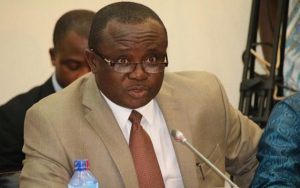 First Deputy Speaker of Parliament Hon. Joe Osei Owusu has revealed how he felt over bribery allegation leveled against him by colleague Member of Parliament (MP) for Bawku Central, Hon. Mahama Ayariga.

According to him, he became unhappy man until he was cleared by Joe Ghartey’s Committee of all the allegations made against him.

“Emotionally I was feeling bad as a human being. It had to take some people closer to me to know I was very angry”, the lawmaker for Bekwai Constituency revealed.

“During one of Committee’s sittings, I was so emotional that a friend abroad texted me a message to control my temper”, Hon. Joe Osei-Wusu spoke on Kumasi-based Nhyira FM.

“I am a human being but I have to forgive those who made those allegations against me….but this time I am watching my steps in dealing with everyone”, the Chairman of the Appointments Committee of Parliament stated.

In January this year, MP) Hon. Mahama Ayariga, made some allegations against some members of the appointments committee of parliament.

He was alleged to have said each member of the committee was given GH¢3,000 to approve the nomination of Energy Minister-designate, Boakye Agyarko

The Joe Ghartey committee was therefore constituted after allegations by the Bawku Central MP Mahama Ayariga that the Chairman of the Appointment Committee Joseph Osei-Owusu had given the stated GH¢3,000 each to minority members of the committee to approve the Minister of Energy nominee at the time.

Ayariga told an Accra based radio Station Radio Gold that the money was given to the Minority Chief Whip Muntaka Mubarak for onward distribution to the members of the Minority.

He explained that the Minority MPs on the committee initially accepted the monies thinking it was payment of their sitting allowance.
Source: mynewsgh.com