I will deal with bribe takers at Race Course 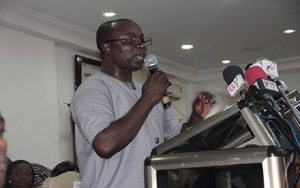 The Mayor of Kumasi, Osei Assibey Antwi has stated that those found guilty of collecting bribes from traders and drivers for the allocation of spaces at the Kumasi Race Course will be made to face the full rigorous of the law, irrespective of one’s political affiliation or social class, after investigating into the alleged corrupt practices at the area.

He said the alleged corrupt practices have tarnished the good reputation of the Assembly, and every effort will be made to restore the image. He believed the National Security and Ghana Police Service will soon come out with their findings for onward arrests and prosecutions.

The Mayor said this when addressing traders and drivers at the Race Course on Wednesday November 22, 2017, after visiting some selected areas in Kumasi, with the Ashanti Regional Minister, Simon Osei Mensah.

Others areas they visited include the Kumasi Central Market, Roman Hill, Alabar, Dr. Mensah, K.O., Sofoline lorry terminal and the Interchange and the Central Business District (CBD) of Adum.

The visit by the Mayor and the Ashanti Regional Minister was to get first-hand information on the development of the relocation exercise.

The Kumasi Metropolitan Assembly (KMA) on November 6, relocated traders and drivers in the Central Business District of Adum, Kejetia, Pampaso, S.A.T and Dr Mensah to the Race Course and Abinkyi markets.

The relocation exercise according to the Mayor is to pave way for contractors working on the first phase of the Kejetia Redevelopment Project have access to the artillery roads around the project and upgrade them.

The relocation is also to help ease the heavy vehicular and human congestion and also pave way for some rituals to be performed as part of activities marking the final funeral rites of the Late Queen mother of Asanteman, Nana Afia Serwaa Kobi Ampem who passed on to the ancestors in 2016.

“Plots here are not for sale. When I returned from my trip to abroad I heard that some people are selling them to traders and transport operators. The security agencies are investigating the matter, and I’m telling you that those who were engaged in the transaction of the sales will be arrested and prosecuted,” the Mayor warned.

He also revealed that the Assembly will soon conduct registration and validation for all traders at the Race Course to check multiple acquisitions of stalls at the area.

“Very soon the Assembly will start verification and registration of all traders here, using your Identity cards. Anybody found to have owned more than one plot or stall here will be arrested and the plots taken away from that person. Please don’t try to be smarter than us because we have all the lists of traders here,” he added.

He said the move will allow traders who are yet to get spaces at the Race Course market and still selling at unauthorised places get the needed spaces.

The Ashanti Regional Minister, Simon Osei Mensah addressing the traders gave a one-week ultimatum to traders who have acquired plots and stalls at Race Course but choose not to occupy them to do so or risk losing them to those who are ready to do business at the area.

He warned that no trader will be allowed to sell on the streets, pavements and unauthorised locations in the city, and will make sure all structures at unauthorised places are destroyed.

Both the Mayor and Regional Minister expressed their satisfaction with the progress of work at the Race Course and assured the occupants of providing all the needed facilities to make their stay comfortable.
Source: otecfmghana.com