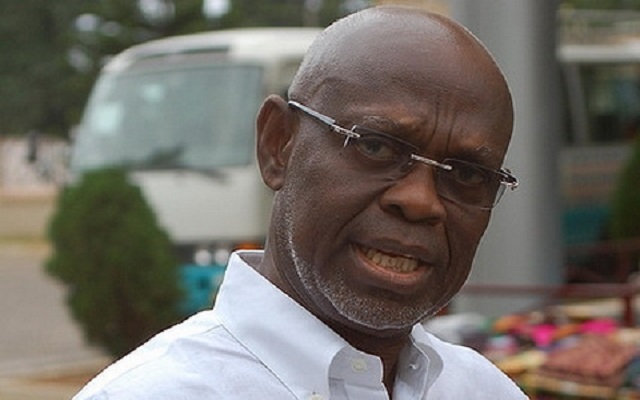 It is becoming increasingly clear that former Finance Minister under the JJ Rawlings’s administration, Professor Kwesi Botchwey, is gearing up to contest for the position of flag bearer on the ticket of the National Democratic Congress (NDC) for the 2020 presidential election.

DAILY GUIDE is reliably informed that Prof. Botchwey, who is Ghana’s longest serving finance minister, is fast catching the ‘eyes’ of the NDC founder – former President Jerry John Rawlings – who is believed to prefer any candidate apart from former President John Dramani Mahama.

Prof. Botchwey’s campaigners believe that presenting Mahama again for the 2020 elections will provide a great weapon for NDC’s opponents and that all the other aspirants are connected with Mahama in one way or the other, since they were in his government.

It is turning out that it was because of the ‘attempts’ by some NDC elders and the party’s cadres to float the candidature of Prof. Botchwey which allegedly has compelled Mr. Mahama to announce his comeback earlier than expected.

As a prelude to the announcement, Kwesi Botchwey is sharing a platform with the NDC founder at the June 4th Revolutionary Lecture Series on Thursday, May 31, 2018.

If confirmed, it will be the second time the economics and finance guru is trying to lead the NDC, the first one being in 2002 when he faced the late John Evans Atta Mills for the NDC slot to contest then President J. A. Kufuor, who was seeking a second term in office.

A source indicated to DAILY GUIDE that as one of the speakers, Prof. Botchwey is going to use the 2nd edition of the Revolutionary Lecture Series – which forms part of activities marking the 39th anniversary of the June 4th 1979 uprising – as a prelude to the announcement of his interest in the NDC flag bearer race.

The lecture will be delivered under the general theme, “Revolutionary Economic Trends, Ghana In Focus: Past, Present And The Future.” It is being organized under the auspices of the Office of former President Rawlings.

According to DAILY GUIDE sources, Kwesi Botchwey has not hidden his interest to lead the NDC as he was said to have disclosed it to some members when he was charged to tour the country to collate views in connection with the NDC’s humiliating defeat in the 2016 general elections. He was made the leader of the 13-member committee which after the investigation, released a damning verdict on former President Mahama and members of his administration.

The Mahama camp has already started firing since it became clear that Prof. Botchwey could enter the contest, accusing him of skewing the Committee’s Report to suit his presidential ambition.

They are also ridiculing the camp of former President Rawlings who, they say, is now shopping for a candidate.

Mr Rawlings per se is reportedly keeping his cards close to his chest, but most party elders and cadres are in total support of Prof Botchwey because they believe he stands a better chance than Mr. Mahama since they say there is no corruption tag on him.

They are also pushing for the former finance minister because they claim the NDC stands on the threshold of unity, unlike Mr. Mahama who has been accused of ‘surrounding’ himself with the same people that led the party to lose the 2016 elections.

According to NDC sources, the cadres, especially are rooting for Prof. Botchwey because they suspect that another powerful faction in the party (Ahwoi brothers) is allegedly pushing former President Mahama to contest again to pave the way for them to get one of their brothers, who was a former minister, to serve as the NDC running mate for 2020.

Ex-President Mahama, in his Facebook announcement, had said that he had ‘listened’ to the numerous ‘calls’ of the rank and file of the NDC and had accepted them; and so was ready to lead the party into another election in 2020.

“To you the teeming supporters and sympathizers calling and requesting me to declare my intentions for the future, I wish to assure you today, that as a servant-leader, I have listened to your calls and reflected. I will not disappoint you even as we await the publication of the party’s guidelines for selecting a new leader,” Mr Mahama had posted.

His comeback attempt, however, is starting another round of ‘serious infighting’ in the NDC.