Let’s unite and give NPP no breathing space 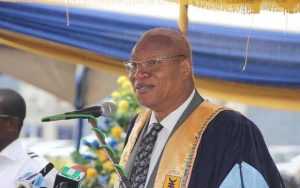 A former Vice-Chancellor of University of Professional Studies, Accra (UPSA), Professor Joshua Alabi has strongly stated that the opposition National Democratic Congress (NDC) needs to unite in order to campaign against the ruling New Patriotic Party (NPP) from winning the 2020 elections.

According to him, the NPP will not have breathing space if the NDC as a party comes together in unity to fight for the 2020 general elections.

He said, “I am confident that if we are able to unite, as I have said before, with former president Rawlings, former president Mahama, former Vice President Paa Kwesi Ammisah Arthur, past and present party chairpersons and other executives and including leading members of the party, NPP will not have breathing space and we shall win election 2020 with God on my side.”

Prof Alabi believes that there is no ‘enemy’ within the party but the ‘enemy’ is outside and it is only through unity that the NDC can fight that ‘enemy’.

The NDC flag bearer hopeful made this remarks at a get-together he organised for some of his campaign members and friends at his East Legon residence.

Prof Alabi has shown great interest in the NDC flagbearership race, saying his greatest wish is to lead the NDC in the 2020 elections.

Apart from him, there are a host of NDC stalwarts who are all planning to upstage ex-President Mahama as the NDC’s flag bearer for 2020 because many claim he does not have what it takes to run for the highest office, again following his abysmal performance in the last election that culminated in his and the party’s defeat.