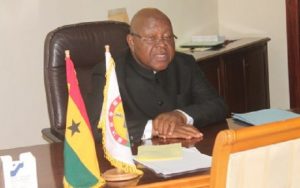 The Minority in Parliament has requested the Speaker to summon the House for a special sitting to investigate the Trade Ministry’s collection of various sums from expatriate businesses.

The request was contained in an emergency motion to the Speaker, Prof Mike Ocquaye.

The motion requests, “that this Honourable House investigates the levy and collection by the Ministry of Trade and Industry of a Ghana cedi equivalent of various sums of money in United States of American dollars from expatriate businesses in Ghana and related matters during the recently held Ghana Expatriate Business Awards in Accra.”

The request follows government’s clearing the Trade Ministry of any wrongdoing after the Minority Chief Whip accused the Ministry of charging unapproved fees to the tune of $100,000 to grant access to President Akufo-Addo.

The President, Nana Akufo-Addo, said the information available to him on the $100,000 reserved-seat scandal does not support the claim of wrongdoing.

“The facts, as reported to the president, do not disclose any wrongdoing on the part of the Minister or any government official,” Information Minister, Mustapha Hamid said in a statement last Thursday.

The statement came days after public outrage over claims that the Trades Ministry has extorted $100,000 from expatriates for a “presidential seat” at the Ghana Expatriates Business Awards (GEBA).

Deputy Trades Minister Carlos Ahenkorah has admitted some monies were taken from expatriates but said they were later transferred into the account of the awards organizers, Millennium Excellence Foundation (MEF).

But the Minority Chief Whip Muntaka Mohammed who was not satisfied described government’s explanation as an unacceptable “complete cover-up”.

He said government’s stance was similar to case of the sale of the five million contaminated fuel at the Bulk Oil Storage and Transportation Company Limited (BOST) as well as the corruption allegations levelled against the two Deputy Chiefs of Staff.

“I believe and the minority still believes that if a parliamentary probe goes ahead many things will be unearthed,” Mr Mohammed said.

He said the president’s explanation for clearing the Trades Ministry of any wrongdoing amounts to an insult of the intelligence of Ghanaians, adding the Minority will be able to prove that some people paid the $100,000.
Source: Myjoyonline.com