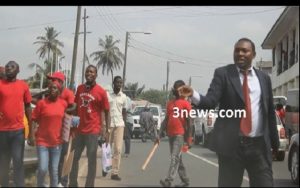 More demands have been made on the leadership of the New Patriotic Party (NPP) to take punitive action against security guards who assaulted journalists at the party’s head office last Thursday.

The guards manhandled the journalists in an attempt to stop them from covering a demonstration by some members of the party.

A journalist from Media General’s TV3, Godfred Tanam, GhanaWeb and Citi FM were among those assaulted.

One of them was later hospitalized but has since been discharged.
Speaking on TV3’s News 360 over the weekend, General Secretary of the Ghana Journalists Association (GJA) Edmund Kofi Yeboah said it will only be by bringing the “culprits” to book that the pains of the victims will be assuaged.
“We are not very happy about the incident because it is becoming one too many,” he told presenter Abu Issa Monnie.

He said the situation is creating a “grooming culture of impunity, which we think should come to an end”.

“Apart from condemning the action, we are calling on the leadership of the NPP to bring these culprits to book and that is the only way [that we] will…know they also are not in support of the action.”

Though some leading members of the party have apologized over the incident, the GJA scribe said: “We need to go beyond mere condemnation of such action.”

He observed that attacks by political party supporters has become a canker to security.

“The leadership of the NPP must demonstrate commitment that this canker is brought to an end
Source: 3news.com