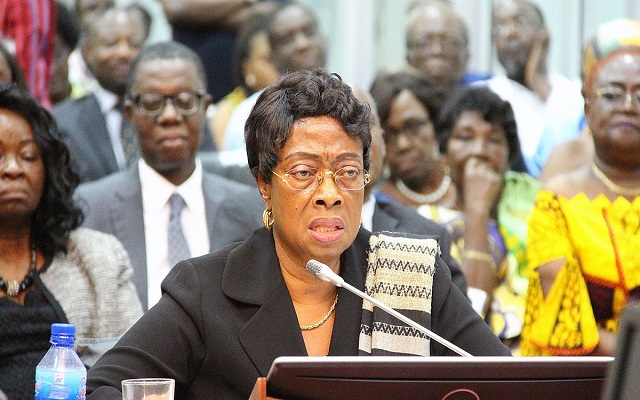 Ms Sophia Akuffo,, the Chief Justice on Wednesday tasked government to devise means and mechanisms to ensure that the financial independence of the judiciary, envisaged by the Constitution becomes a reality.

According to the Chief Justice (CJ), although the Constitution guaranteed the judiciary, financial independent, in practice, it was not financially independent.

She explained that the judiciary had been subjected to the same budgetary constraints as Ministries, Departments and Agencies (MDA’s) but the judiciary in law, does not form part of these MDA’s.

She was speaking at the Association of Magistrates and Judges (AMJG) 38th Annual General Meeting (AGM) held in Accra on the theme: ‘Independence of the Judiciary- The Way forward’.

Ms Akuffo said: ‘the judiciary does not receive all its releases even after its budget has been approved annually…payment of these releases also delay unreasonably’.

According to her, those militating factors were negatively affecting key projects such as the e-Justice Project, as well as the smooth operation of the Judiciary and the Judicial Service as a whole.

On Infrastructure, the CJ said any court, which did not befit the status of a court, would be closed down and Magistrates and Judges from these courts would be given new places.

Ms Gloria Akuffo, Minister of Justice and Attorney General said on the digitisation drive, Ghana’s Judiciary could not be exempted.

She said the adoption of video conferences and filing of processes online, could cut down cost and appealed to the Judges and Magistrates to embrace Information Communication Technology.

Ms Akuffo tasked the association to take retrospect of work done during the year and value the things they could do as government strive to improve on their resources.

There were some fraternal messages from the Ghana Bar Association and Judicial Service Staff Association of Ghana.
SOURCE GNA