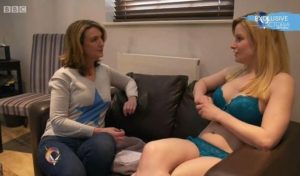 A marine biologist turned prostitute has revealed why she’s selling sex to pay off her £20,000 student debt.

The British graduate admits she’s “stubbornly defiant” about her right to sell sex and can earn as much as £3,600 a month.

Louise, who has a diploma in marine biology, told Victoria Derbyshire on her BBC show she is keen to challenge the stigma around sex work.

She confessed she would rather work three or four days a week selling sex rather than in a petrol station on minimum wage.

Louise, who went to university and has been employed in an office, now works from a two-bed flat in Westminster.

“I’m stubbornly defiant about my right to do this kind of work without people inflicting their moral judgements on me,” she said.

“I don’t want people to think I’m on drugs or that I’ve been forced or coerced or trafficked.

“I’m just here as a normal person who wants to make money, secure a future for myself and do this kind of work because I choose to.”

Louise revealed she is enjoying her sex work and likes working in an environment she can guarantee is clean and safe.

She said: “Sometimes I will enjoy myself more than at other times. I think that’s true of any job. You will like some clients more than other regardless of the type of work you’re doing.

“Whether I was having sex with someone or doing their books or interior designing their house.”

The brothel in run by a former policeman, known only as Karl, who said police are aware of his premises but have never prosecuted him

When asked if he ‘exploits’ women, he said: “No. I believe I provide a service. We provide a safe environment. If they close us down I could go to prison, they could get a lot of kudos. But then there’s 15 to 20 girls who have got to find somewhere to work.

“So they might be thinking let’s just police this by visiting them regularly and making sure everything is in order.”