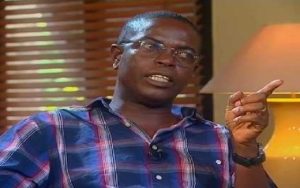 The Managing Editor of the Insight newspaper, Kwesi Pratt Jnr, has stated that the NPP party in their 2016 manifesto failed to tackle national concern instead of proposing for ‘one- village, one-dam’.

According to him, the NPP lost focus with their campaign promise.

“The NPP lost focus drastically because, if you read through their manifesto carefully, you will think they didn’t do their research very well before coming out with that promise.”

“If u make a promise that is scientifically baseless then there is a problem, recently the sector minister told us that, the geology in the three Northern Region was that, it was impossible for one village to one dam.”

“And before making that promise you should know that the geology was very important, you just don’t talk.”

However, explaining how Agriculture sectors have impacted the nation on Accra based Radio Gold, he noted that, the Agric sector had come under lots of attacks under the NPP.

“One major fact is the invasion of the armyworm that heavily destroyed lots of farms products in the Northern region.”

“Swine fever and bird flu was another challenge that had been refused to be tackled by government.”

“I am surprised people are rather thinking of post-harvest loss.”

“Many people have not been compensated after having their farms destroyed.”

“I believe in addressing post-harvest loss there must be a national policy to ensure that.” He added.
Source: ghanacrusader.com