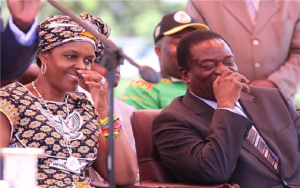 An International Law lecturer foresees another impasse in Zimbabwe as the ruling Zanu-PF party readies to replace Robert Mugabe with former Vice President, Emmerson Mnangagwa.
Dr Kwame Agyeman says there could be a constitutional breach if Mr Mnangagwa is appointed an interim President because he had been sacked as Vice President before Mr Mugabe resigned as President in a surprise turn of events, Tuesday.
“Section 101 of the Zimbabwean Constitution stipulates quite clearly the hierarchy [of authority] and who should take over in the eventuality of the resignation of the President, and the Vice President is to take over.
“But in this case, the Vice President was taken out of his position by the sitting President…at the time [the Vice President was fired] the President hadn’t resigned.
“He was President; he was acting within the remit of his power. So this Vice President has been set aside, then the President resigns.
“So we don’t know who the Vice President is,” he said on current affairs programme, PM Express, on the Joy News channel, Tuesday evening.
Dr Agyeman is of the view that constitutional lawyers in Zimbabwe could kick start what he terms a “constitutional standstill” if they decide to take up the matter.
Zimbabweans jubilated wildly following news that Robert Mugabe’s 37-year rule has come an end.
A letter from Mr Mugabe read out by the speaker of parliament said Mr Mugabe has decided to resign voluntarily to allow for a smooth transfer of power.
The news abruptly halted an impeachment hearing that had begun against him.
The ruling Zanu-PF party says Mnangagwa will succeed Mr Mugabe.
Mr Mnangagwa’s sacking triggered a political crisis, many saw It as an attempt to clear the way for Grace Mugabe to succeed her husband as leader.
The military leadership stepped and put Mr Mugabe under house arrest.
Meanwhile, another International Relations expert, Dr Vladmir Antiwi-Danso, said the assessment by Dr Agyeman is not accurate.
He said although Dr Agyeman’s argument may hold in law, there was the need to consider the politics that triggered Mr Mnangagwa’s sacking.
Source: Myjoyonline.com