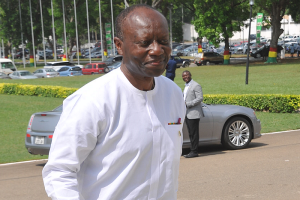 The Minister for Finance, Ken Ofori-Atta will present the Akufo-Addo-led government’s second budget statement and economic policy to Parliament today, November 15, 2017 for the 2018 fiscal year. The budget is expected to focus on industrialization, agriculture as well as consolidating gains made since taking office on January 7, 2017. The first budget of this government under theme “Sowing the Seed for Growth and Jobs” was read on March 2, 2017 in which the Free SHS Policy, Planting for Food and Jobs, One-District-One-Factory policy and other landmark social intervention programmes were announced. The finance minister highlighted among others the withdrawal of the 1 percent Special Import Levy; 17.5 percent VAT/NHIL on financial services; and 17.5 percent VAT/NHIL on selected imported medicines, that are not produced locally; as we; as 17.5 percent VAT/NHIL on domestic airline tickets and levies imposed on kayayei by local authorities. The government was able to achieve these promises among others.

Since revenue mobilisation was the government’s biggest challenge, the 2018 budget is expected to introduce some aggressive measures to ramp up domestic resource mobilisation, the state-owned Daily Graphic reported on its website. It also claimed the government would be seeking approval from Parliament on Wednesday November 15 to spend some GHC61 billion next year. The amount is needed to anchor the government’s agenda of moving the economy beyond the reliance on foreign support or aid. The budget is, therefore, expected to focus on ensuring macroeconomic stability, transforming agriculture and industry, strengthening social protection and inclusion, building on economic and social infrastructure and reforming public service delivery institutions.

According to the president, Nana Akufo-Addo, the 2018 budget will create jobs as it gives meaning to the government’s industrialization agenda with the hope that it will strengthen Ghana’s economy. The president also hinted that electricity tariff would be reduced next year. In spite of the numerous taxes abolished by the government under the 2017 budget that were supposed to inure to the benefit of the private sector, industry players still expect more tax cuts from the government. For instance, telecommunications giant, MTN wants government to withdraw the National Fiscal Stabilisation Levy (NFSL) in the 2018 Budget Statement. The Trades Union Congress expects the budget to address the issue of unemployment as well as promote economic growth in the country. On their part, drivers under the Ghana Private Roads Transport Union (GPRTU) are asking the government to scrap taxes on petroleum products
Meanwhile, the Minority NDC in Parliament is predicting a bleak future for Ghana as it accuses the government of developing excessive interest in borrowing. They warned Ghana may end up being highly indebted poor country (HIPC) again in the nearest future. It also accused the government of scheming to reintroduce taxes it abolished in the 2017 budget as well as introducing new ones. But government officials are upbeat about the ability of the policies and programmes to be outlined in the 2018 budget statement will turn the economy around and facilitate Ghana’s development agenda.
Source: 3news.com |