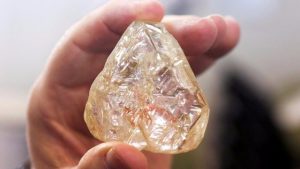 An African pastor’s miracle discovery of a massive uncut diamond has just been sold at auction so the community leader can bring clean water and medical supplies to his village.

The 709-carat”Peace Diamond”  was discovered in the village of Koryardu in March.

The diamond’s owner, Pastor Emmanuel Momoh, vowed to sell the gem in order bring the struggling village the relief it needed.

“The Peace Diamond will greatly improve the lives of our people as it will bring clean water, electricity, schools, medical facilities, bridges and roads to our villages and the Kono District,” Momoh said in a statement, obtained by Forbes.

After an initial offer for the world’s 14th largest diamond was rejected by Sierra Leone’s government in May, the stone went back on the auction block and sold for $6.5 million in New York on Dec. 4.  The hefty price tag, which is actually $1.3 million less than the offer in May, was paid by British jeweler Graff Diamonds.

“The sale of the Sierra Leone Peace Diamond represents a new future for the people of Sierra Leone,” said Martin Rapaport, head of the group appointed to oversee the diamond’s sale. While the government of Sierra Leone says it intends to help Pastor Momoh keep his promise, it’s uncertain how much of the profit will now go to the Kono District.
According to local reports, Momoh’s failure to have a proper mining license at the time of the discovery means he will only receive 41 percent of the $6.5 million the Peace Diamond sold for.
“Technically, he did not own the diamond. The diamond belongs to the government of Sierra Leone,” Sahr Wonday of the minerals regulatory agency told the Daily Nation.
Rapaport’s group claims the other 59 percent of the diamond’s profit will go to the African nation in the form of taxes which will be used to benefit the community.
“We anticipate a virtuous cycle of development as taxes from the sale provide a tangible benefit to the artisanal sector,” the group’s chairman added.
It’s not yet know how the change will affect Pastor Momoh’s plans for his village.