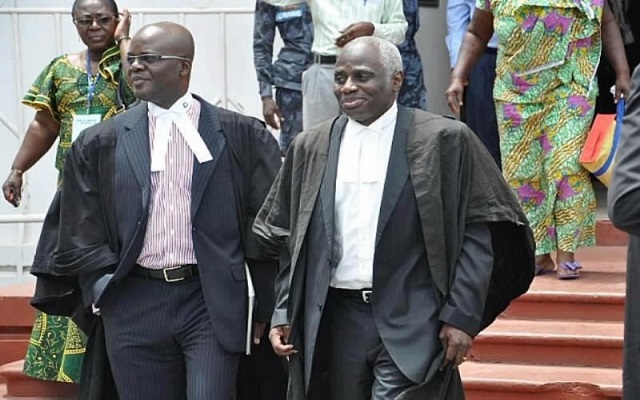 Mr. Tsatsu Tsikata, counsel for the Petitioner in the 2020 election petition trial, on Tuesday told the Court that he has filed two applications which are pending before the Supreme Court.

Mr. Tsikata filed an application for review of the Court’s decision on February 11 and also a stay of proceedings.

This was after the Supreme Court had unanimously dismissed the Petitioner’s application to reopen his case.

Mr Tsikata wants the Supreme Court to halt proceedings in order to hear the review application in relation to the dismissal of a motion seeking the order of the court to compel Mrs. Jean A Mensa to mount the witness box.

The court had earlier ruled that the EC and second respondent (President Nana Addo Dankwa Akufo Addo) as parties to the suit cannot be compelled to testify under the law.

At today’s sittings, Chief Justice Kwasi Anin Yeboah said the court would hear the two applications after the Registrar of the Court had fixed dates for hearing.

Meanwhile the court has fixed February 17 for lawyers in the case to file their closing addresses simultaneously, as parties have closed their case.

The Election 2020 Petition trial has been adjourned to February 18 and lawyers are expected to make legal arguments in support of their respective addresses.

The first and second respondents (the Electoral Commission and Nana Addo) declined to testify after the Petitioner closed his case, with the reason that, the petitioner in his testimony failed to discharge the burden of proof.

The petitioner later prayed the SC to compel the two respondents to testify.

Again, the Petitioner wanted the court to subpoena the EC boss to testify allegedly in the interest of justice and accountability.

Mr. Mahama had gone to court to challenge the validity of Election 2020 which declared President Nana Addo as the winner.

He further accused the EC of Vote padding but that assertion the EC has denied.