Petitioner is not relying on the evidence of the respondents 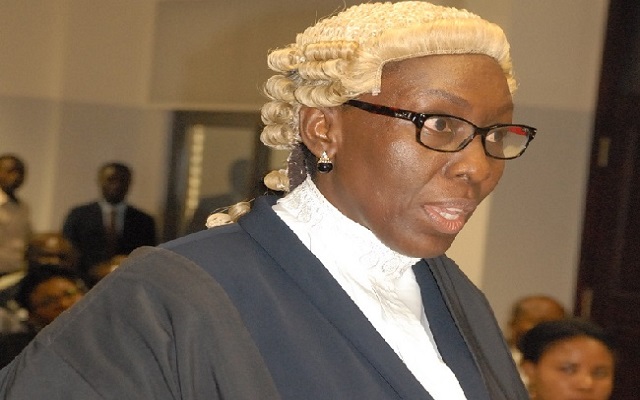 Madam Appiah-Oppong, who was addressing the press in a post-trial interview, said Mrs Jean Mensa, the Chairperson of the Electoral Commission, the first Respondent, was accountable to the people.

The Supreme Court, on Thursday, February 11, 2021, dismissed an application by the Petitioner to compel the Chairperson and the witness of President Nana Addo Dankwa Akufo-Addo, the second Respondent, to mount the witness box to testify and be cross examined.

The Court, presided over by Chief Justice Kwasi Anin Yeboah, said it did not intend to extend its mandate beyond what the law required in such petitions brought under Article 64 (1), challenging the validity of the election of the President.

The Court, also said it was not convinced and would not yield to the invitation extended to the Court by Counsel for the Petitioner, Mr Tsatsu Tsikata, to order Mrs Jean Mensa, to mount the witness box to be cross-examined on the EC’s witness statement.

Accordingly, “We overruled the objections raised by Mr Tsikata for the Petitioner against the decision by the Respondents not to adduce evidence.”

After the ruling, the lead Counsel for the Petitioner informed the Court that they were in the process of applying for leave to re-open their case and subpoena the Chairperson of the Commission to appear before the Court.

The Petitioner also served notice that he intended to apply for review of the ruling not compelling the respondents to mount the witness box to be cross examined.

The Court adjourned the matter to February 18, 2021, to enable the parties file their written addresses by February 17.

Madam Appiah-Oppong, said the Chairperson of the Commission had to account for how, those errors arose and when she discovered them.

“Where are the principles of accountability and when is the Commissioner going to be accountable,” she asked.

Former President Mahama filed a Petition at the Supreme Court seeking an annulment of the Presidential election results and a re-run of the election between him and Nana Akufo-Addo who is the second Respondent in the petition.

The Petition is also seeking an injunction directing the 1st Respondent, EC, to proceed to conduct a second election between the Petitioner and the 2nd Respondent as candidates.
GNA