We will also subpoena the Petitioner 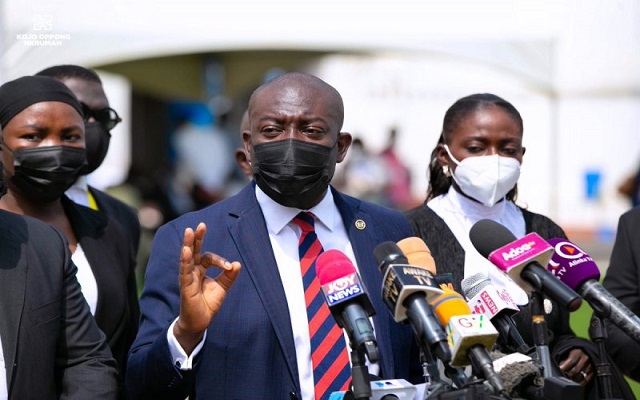 Mr Kojo Oppong Nkrumah, a Spokesperson for President Nana Dankwa Akuo-Addo (second respondent) in the 2020 Presidential Election Petition trial on Thursday, said they will also subpoena the Petitioner if, he succeeds in subpoenaing the Chairperson of the Electoral Commission.
He said he had heard conversations by some of the Counsel for the second respondent that if the Petitioner elect to subpoena Mrs Jean Mensa, the Chairperson of the Electoral Commission they would also have to elect to subpoena the Petitioner, former president John Mahama to also mount the witness box.

Mr Oppong Nkrumah who was speaking at the post-trial interview said, compliance with court orders to file a witness statement does not amount to an election to give evidence in a trial, adding that the court has addressed that argument.

The Supreme Court, on Thursday, February 11, 2021, dismissed an application by the Petitioner to compel the Chairperson and any witness of President Nana Addo Dankwa Akufo-Addo, the second Respondent, to mount the witness box to testify and be cross examined.

The Court, presided over by Chief Justice Kwasi Anin Yeboah, said it did not intend to extend its mandate beyond what the law required in such petitions brought under Article 64 (1), challenging the validity of the election of the President.

The Court, also said it was not convinced and would not yield to the invitation extended to the Court by Counsel for the Petitioner, Mr Tsatsu Tsikata, to order Mrs Jean Mensa, to mount the witness box to be cross-examined.

Accordingly, “We overruled the objections raised by Mr Tsikata for the Petitioner against the decision by the Respondents not to adduce evidence.”

The decision by the Supreme Court follows oral arguments made by the lawyers for the first and second respondents that their clients cannot be compelled to testify.

After the ruling, the lead Counsel for the Petitioner informed the Court that they were in the process of applying for leave to re-open their case and subpoena the Chairperson of the Commission to appear before the Court.

The Petitioner also served notice that he intended to apply for review of the ruling not compelling the respondents to mount the witness box to be cross examined.

The Court adjourned the matter to February 18, 2021, to enable the parties to file the written address by February 17.

Mr Oppong-Nkrumanh said they were convinced from the onset that the petitioner did not have a case.

He said it was becoming clear, particularly to the NDC supporters across the country, who have been believing everything they were being told by their party officials that; first they said they won, then they changed it that they did not win and the last one they have been changing and clinging on to is the argument that it was a Constitutional accountability matter and it was not so much about who get 50 per cent.

The Spokesperson said, to the NDC supporters “Your leaders have been shifting the goal posts and are not meeting the evidence standards.”

“We continue to say, we are in the hands of the court and they will file their submissions by the dead line and pray the court to dismiss the Petition before it,” he said.

Former President Mahama filed a Petition at the Supreme Court seeking an annulment of the Presidential election results and a re-run of the election between him and Nana Akufo-Addo who is the second Respondent in the petition.

The Petition is also seeking an injunction directing the 1st Respondent, the Electoral Commission, to proceed to conduct a second election between the Petitioner and the 2nd Respondent as candidates.