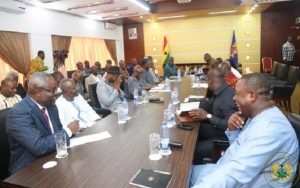 The President, Nana Addo Dankwa Akufo-Addo, on Thursday, 4th January, 2018, met with the leaders of the various political parties in the country to seek their views on some governance-enhancing measures his administration intends to take.

The meeting, which was the first between a sitting President and leaders of the political parties in recent years, lasted well over three hours, and was held in a good atmosphere, one of frank exchanges and mutual respect.

Issues discussed included the commemoration of the Silver Jubilee of the 4th Republic, on Sunday 7th January, 2018; the election of Metropolitan, Municipal and District Chief Executives; and the creation of new regions, amongst others.
It is the intention of President Akufo-Addo to have further such meetings in the future, with the leaders of the political parties, who described this initiative as a laudable one.