President Akufo-Addo urges NPP members to be focused and united 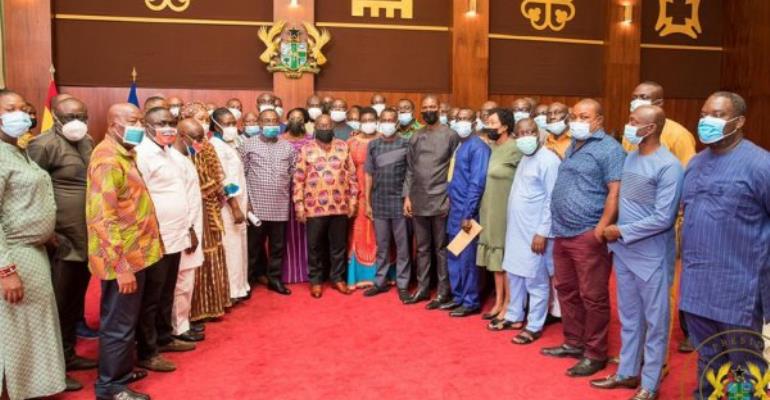 President Akufo-Addo Thursday appealed to the leadership of the New Patriotic Party (NPP) to remain focused and united to ensure the stability and progress of the party.

He said infighting and finger-pointing would create volatilises inimical to the party, which in turn could lend the opposition some serious political capital.

“The most important thing for us to do at this stage, is to keep together…is to reinforce our unity and maintain our morale,” he said in meeting with the NPP’s regional executives and chairmen of the constituencies in the Greater Accra Region, at the Jubilee House, Accra.

“If we are going to spend a lot of energies pointing fingers at each other, neither of those things are going to be attained,” he told them.

The President told the party officials that what should occupy them was to counter the false narratives the opposition was propagating about the outcome of the December 2020 elections.

“So I want you very much to have that in mind, you’ll have something else, very important in mind, these NDC people making so much noise, we won we won, remember they began, one time we even went to 145 seats, they could never be quite clear how many with 139, 140 , 141, 145, Mahama had won the election.

“It turned out all to be false, and we should remember, ever since Jerry John Rawlings left the presidential scene of politics in our country, no NDC presidential candidate has won more than 51 percent of the votes. His successor Mills, in his first round against Kufour 44 per cent, second round 47 per cent.

“What these figures tell us is that whenever we NPP put our acts together we win,” he stated

President Akufo-Addo reinforced the fact that “the majority is with us, so let us be very clear in our mind, our opponent with all the shouting do not have the support of the majority of the people in our country.”

“So the future of Ghana, the future of this country is in our hands. It is the function of how we behave, how we organize ourselves that will determine how the country will also move ahead,” he stressed.