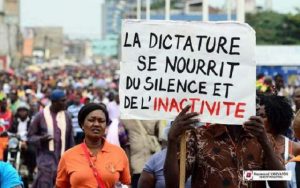 The Ghana-Togo Solidarity Movement, a group formed by Ghanaians to support the fight for freedom for citizens of Togo, is set to hold its solidarity walk on Saturday, December 30.

The rally to be held at the Kawukudi park is to draw the attention of local and international communities to the political crisis in Togo.

The first rally on December 16 was disrupted by the police who claimed the gathering was unlawful, but was disputed by the organisers. About 19 supporters of the Movement including the convener Bernard Anbataayela Mornah were arrested.
In an interview with 3FM News on Friday, Mr. Mornah said he has had a discussion with the Minister of National Security, Kan Dapaah and the Movement have been cleared to go ahead with their intended peaceful march.

He expressed his satisfaction with the latest development: “I’m happy that eventually the police is beginning to respect itself as an institution and to know that they do not have the power to stop citizens who would want to manifest any public event “.

Bernard Mornah who is also the Chairman of the People’s National Convention called on all well-meaning citizens of the world, to join the Movement on Saturday morning as they rally support for peace, freedom and respect for human rights for neighbouring Togo.
3news.com