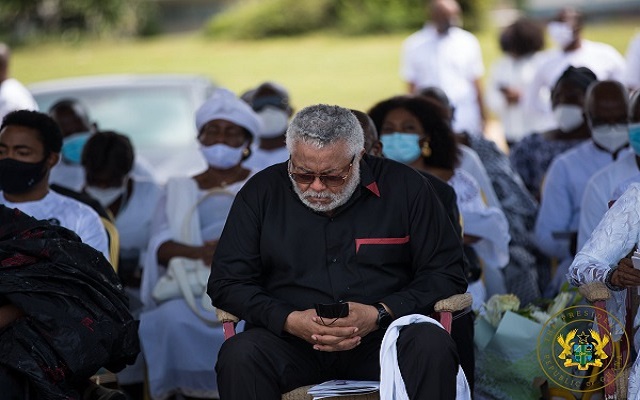 The mortal remains of the late former President Jerry John Rawlings will be laid to rest today at the Military Cemetery, in Accra.

This will be preceded by a state burial service at the Black Star Square, climaxing a four-day elaborate state funeral.

The burial service will be attended by President Nana Addo Dankwa Akufo-Addo, Vice President Alhaji Dr Mahamudu Bawumia and some heads of states in the sub-region.

Despite COVID-19 restrictions, the burial service is expected to attract hundreds of Ghanaians from across the country, with calls on many to follow the event on television or online.

Ghana received the news of the sudden death of ex-President Jerry John Rawlings with disbelief and sorrow on Thursday, November 12, 2021, after a short illness.

The Founder of the National Democratic Congress (NDC) was the first president of the Fourth Republic, ruling from January 1993 to January 2001, having served the maximum two terms.

Before then, he was the Head of State from December 1981 to December 1992, coming to power through a military coup.

Born 22 June 1947, in Accra, Gold Coast, the former air force officer and politician first appeared on the Ghanaian political scene on 15 May, 1979 when he led a group of junior officers in the Ghana Air Force in an unsuccessful coup d’état that resulted in his arrest and imprisonment.

He was court-martialled in public and sentenced to death. Due to his display of patriotism in his defense speeches, he was widely seen across the country as a true son of Ghana, and was nicknamed Junior Jesus for his initials “JJ”.

Before he could be executed, another group of junior officers within the Ghana Army led by Major Boakye-Djan, overthrew the then military government of Lieutenant General Fred Akuffo in a bloody coup on June 4, 1979. Major Boakye-Djan and his men also set Rawlings free from prison, and installed him as head of the new government – the Armed Forces Revolutionary Council (AFRC).

At the time of the coup, Ghana was already far into the process of returning to civilian rule and general elections were already scheduled. Hence, the AFRC went ahead to conduct an election and handed over power to Dr. Hilla Limann who won the popular vote in the election to establish the Third Republic.

He then installed the Provisional National Defence Council (PNDC) regime. In all Jerry Rawlings performed three coups d’état in Ghana, two of which were successful.

Rawlings was married to Nana Konadu Agyeman-Rawlings and had four adult children: three females and a male. He was the joint recipient of the 1993 World Hunger Award.

On 8 October 2010, the Chairperson of the Commission of the African Union (AU), Jean Ping, appointed Rawlings, as the AU High Representative for Somalia.

“A great tree has fallen, and Ghana is poorer for this loss…May his soul rest in perfect peace in the bosom of the Almighty until the Last Day of the Resurrection when we shall meet again,” said, President Akufo-Addo.