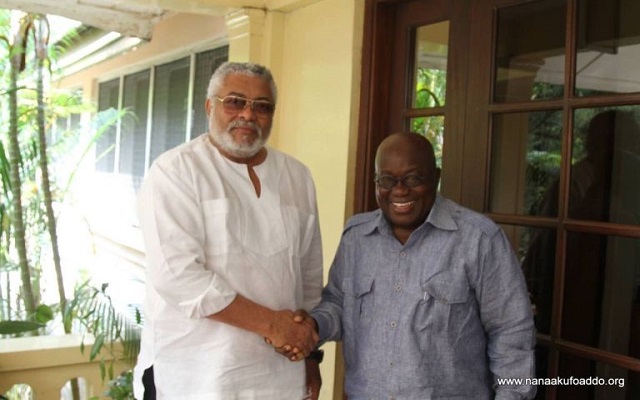 President Akufo-Addo has lauded the contributions made by former President Jerry John Rawlings to the country’s democratic growth.

Speaking at the state funeral of the late statesman, he said the monumental developments the country has chalked under the governance of Rawlings would continue to linger in the hearts of many generations to come.

“I believe that history, on balance, will be kind to him [Rawlings], and will render a positive verdict on his contribution to the evolution of our nation, and the entrenchment of its democratic institutions and culture,” he said in his tribute.

In view of this, President Akufo-Addo indicated that it is entirely appropriate and fitting that Rawlings should receive a State funeral with full honours to express the gratitude of the nation.

He added, “It is in this recognition that I decided to commemorate January 7, as Constitution Day on the national calendar. It is, perhaps, the greatest tribute a grateful nation can offer to the men and women whose efforts led to the establishment of the country’s Fourth Republic.”

The broad visions of Rawlings, according to President Akufo-Addo, did not lie at the shores of Ghana but extended to other neighbouring countries to ensure the greater good of Africa.

His exemplary role serves as precedent to all who fill his once held position as Chairmanship of the ECOWAS Authority of Heads of State and Government, he noted.

President Akufo-Addo likened the late statesman to a meteor that maintains composure and not burst into flames and later disintegrates.

He said former President Rawlings held strong virtues such as “charismatic, energetic and fearless” that still remain potent even at the very end of his life.

“It is my hope and prayer that he remains, the longest-serving Head of State in our nation’s history, for that would mean that the 4th Republican Constitution and its enshrined term limits have endured,” he added.

Meanwhile, President Akufo-Addo acknowledged that although he and Rawlings did not have a great beginning, their love for public service created a strong bond that lasted till his demise.

“We came to see value in each other, and understood, to a very large degree, our respective perspectives. One thing we had in common was our mutual commitment to public service,” he said.

President Akufo-Addo concluded that the name and works of Jerry John Rawlings will continuously leave “strong footprints in the sands of time.”
Source: Myjoyonline