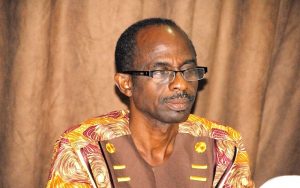 The General Secretary of the National Democratic Congress has challenged President Akufo-Addo to sign the Special Prosecutor Bill passed by Parliament into Law.

The law, when signed by the President, will create an office to take the power of prosecuting corrupt public officials from the Attorney General to the “Special Prosecutor”.

Nana Akufo Addo as part of his campaign, promised to create the office so the accusations of witch hunting during such prosecutions will be history.
Speaking at the 36th Anniversary Celebration of the 31st December Revolution held in the Volta Regional Capital, Ho, Mr. Nketia said the NDC is ready to dance in the same glass bowl as the New Patriotic Party and their appointees.

“As long as we can be sure that the justice-seeking means are blind to party affiliations, we in the NDC are ready to stand by the NPP to prosecute corrupt public officials.
“We thought by now the president would have signed the act; we thought by now the Special Prosecutor would have been appointed considering the way the NPP jubilated when the bill was passed by parliament.

“Parliament has done its bid by passing the law, all we are asking from our colleagues is to tell the president to sign it into law”, he said.

“We also thought the Right to Information Bill will also be passed,” he said.

He also took a jab at the government for settling on August 4 as founders’ day.

“31st December will be a better public holiday than August 4 because the values of the revolution which are probity and accountability should guide all of us; it is not just about celebrating Rawlings,” he said.
Myjoyonline.com