I can’t criticize NPP when NDC is burning 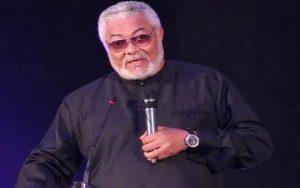 The former President, Jerry John Rawlings wants immediate revolution in the National Democratic Congress that would keep the party on the path of its core values – probity, accountability and justice.

He further appealed, “You have to be strong, steadfast and politically robust. You have to rise up to be counted just as our dynamic women, selfless youth, workers, farmers, petty traders, comrades did for us three decades ago. Sadly we ended up disrespecting and denigrating these people who knew nothing but to offer themselves to the party and country.”
Speaking under the theme:”Uniting Around the Principles of Probity, Accountability and Social Justice,” Mr. Rawlings asserted that the NDC should not see itself regaining power if it allows materialism and money politics to dictate their choices.

The former president therefore maintained that as the founder of the NDC, he would rather ensure that the right thing is done in the party than expending his energy on happenings in other institutions.

“Some latter-day party officials have now made it their chore to denigrate me for speaking loudly and forcefully about the wrongs in the NDC when the party was in power. Many of these political novices, eager to please their paymasters may be oblivious to the countless times my counsel was treated with contempt.

“I cannot lay claim to the position of party founder and spend time criticizing another party or institution when my house is burning. Removing the log in my eye is the only way to legitimize any right to expose the speck in another’s.”
3news.com