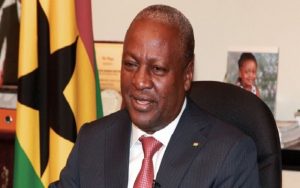 In light of President Akufo-Addo’s assurance of prosecuting corrupt former appointees under the Mahama administration, former President Mahama has called on members of the National Democratic Congress (NDC) to support their own.

The President reiterated his promise to fight corruption by starting with the prosecution of corrupt former officials when he recently toured the Eastern region.

But speaking at the NDC’s annual 31st December Revolution Anniversary this time held in the Volta Regional capital Ho, Mr. Mahama although approving the action of the incumbent government, urged his party faithfuls to sympathise with individuals who will be scrutinized.

“Recently, President Akufo-Addo was threatening members of our administration with prosecution when he visited the Eastern Region and I said yes, we are prepared to accept the probity of our tenure in office. Having been the disciples of probity and accountability, we must not run away from probity and accountability, we must be prepared to face any prosecution that this government throws to us, but we must do this with commitment and solidarity. Solidarity with our colleagues who will fall foul of the law because the law says you are innocent until proven guilty by competence and justice of the court, and so we cannot pronounce our colleagues guilty on the basis of allegations by the NPP.

“They will have their day in court and until they have that day in court, it is our duty to solidarize with them to make sure they have the best legal representation to be able to put their case in order, and it is my wish that things will turn out well for them,” he said.

The former President was also quick to remind his successor to equally pursue corrupt officials within his administration.

“Let me point out that the easiest part in the fight against corruption is prosecuting your political opponent. It does not take courage, it does not take bravery to prosecute one’s political opponent. The true test in the fight against corruption is holding your own people accountable when they go wrong… We must not pursue post regime accountability, we must pursue accountability while your regime exists.”

The Mahama administration was rocked with a number of corruption scandals including the GHC3.2 million bus branding saga, GYEEDA, Ford gift saga, the Subah, just to name a few.

President Akufo-Addo during the 2016 election, expressed his commitment to fight corruption by ensuring that persons indicted in these scandals under the previous administration face the law.

As part of efforts to implement this promise, the NPP administration introduced the idea of setting up the Special Prosecutor to deal with these cases.

The Special Prosecutor Bill which was laid before Parliament has since been passed, with the office expected to be operational soon.

Already, the immediate past Chief Executive Officer of the National Communication Authority (NCA), William Tevie, and four others, have been put before a High Court over the alleged fraudulent $6 million contract between the NCA and Infraloks Development Limited (IDL).

Mr. Tevie, alongside the former board chairman, Eugene Baffoe-Bonnie; Alhaji Osman, a former Deputy National Security Coordinator; Nana Owusu Ensaw, a former board member and the head of IDL, George Oppong, have been charged and arraigned for willfully causing financial loss to the State contrary to section 23(1) and section 179(3) (a) of the Criminal Offences Act 1960, Act 29.

They have also been charged with 16 other offences. The suspects pleaded not guilty to the charges, and were granted bail to the tune of $1 million each with 3 sureties.

They are also to surrender their passports to the court Registrar. The five are facing trial over some $4 million withdrawn from the NCA’s accounts, purportedly for the purchase of a surveillance equipment.

Reports indicate that an Israeli company, NSO Group Technology Limited was contracted to supply the surveillance equipment at the cost of $6 million, to enable National Security monitor conversations of persons believed to be engaged in terrorism.

IDL was also reportedly charging $2 million to facilitate the transaction, bringing the total sum to $8 million.

The three, through the said contract, allegedly withdrew $4 million from the accounts of the NCA and have failed to account for it.

Only $1 million was paid into the accounts of the Israeli company.
Source: www.ghanaweb.com