Storm problems for boat owners in IJburg and Durgerdam 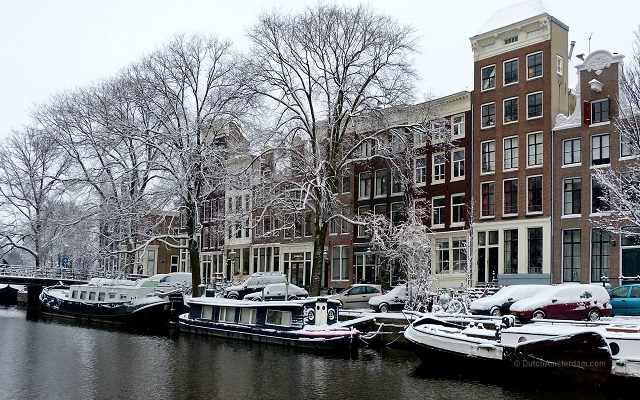 In IJburg, the Eastern storm tore a pontoon loose and houseboats and their inhabitants are covered in the icy wind and drifting snow. In Durgerdam, boat owners towed their vessel ashore to prevent damage from drifting ice. Fortunately for both groups, we had the worst storm.

The storm causes a lot of nuisance on land, but that inconvenience is nothing compared to the hardships faced by water or riverine residents. After a long run across the Markermeer, the strong easterly wind rumbles directly on the houseboats in the houseboat harbor on IJburg. The carried water and the drifting snow create impressive icicle sculptures on the hulls and the jetties. Not to the satisfaction of the residents, who have been asking for extra protection against the elements for as long as they have been there, about five years old.
According to boat resident Mathieu Nap, who moors his ship at the head of the jetty, the pontoons that are currently there are insufficient. Nap: ‘Those are the undersides of houseboats, they are not sheet piles that actually hold back something, we have been asking for that for years, but we always get zero response.’ The jetty where his boat is moored has no railing and is covered with ice, a life-threatening situation. Nap, along with other residents, attempted to lash the pontoons together when the storm was announced, but that failed to prevent one of the floating concrete blocks from being torn off and drifting. In a response, the East district announced that it was informed. According to the city district council, there is no question of an unsafe situation and the VVE is working with the district on a structural solution.
In this dike village it is also clearly visible that there were extreme weather conditions. All jetties are covered with a thick layer of ice and here and there the boats that normally float in the water lie on the bank. Nothing special, according to a passer-by. ‘Strong easterly winds and ice conditions, the residents pull the boats aside to prevent damage.’

Another says that he has already transferred his boat to a safe place. “I saw the storm coming and put my boat in the harbor, it is safe there.” When asked by the reporter whether there were concerns about the strong winds and the extremely high water, the response was a bit compassionate: ‘Not at all, that’s part of the deal if you live by the water, beautiful right.’