Students of hygiene protest to demand payment of allowances 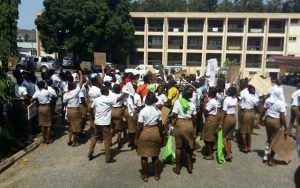 Students of schools of hygiene

Students of schools of hygiene in the country are protesting at various state agencies, demanding the payment of their allowances.
In a statement issued earlier by the presidents of the various Students Representative Councils of the three campuses of the School of Health, the students said that they have gone through all the necessary requirements for their allowances to be paid.
They have submitted their E-zwich and other valid identification cards as well as their account numbers, yet none of the students in Accra, Ho and Tamale has received their allowances.
The students say they do not understand why they have been neglected by the government even though trainees from the various nursing training and colleges of health, have received allowances for September and October, following the president’s announcement of the restoration in October.
Some of them from the Korle Bu campus in Accra, told Joy News’ Maxwell Agbagba the protest is to compel the government to release funds for the payment of their allowances.
“We want government to pay our allowances immediately,” one of the students said.
When asked what they intend to do if the allowances are not paid, the student said “we will go to the house and we will not go back to school until it is settled.”
“We will not go to school for him [president] to see that we are angry. It has been three months now, all institutions around Korle Bu have received theirs, but we haven’t, so we are charging him to pay,” he added.
Another did not understand why their transfer from the Health Ministry’s payroll to the Sanitation Ministry will affect the payment of their allowances.
“We want to tell the government that the fact that we have been transferred does not mean that our allowances should not be paid, 37 [Military Hospital] is under Ministry of Defence but their allowances are being paid,” he said.
The students say the non-payment of their allowances is “killing their career.”
Students in the Northern Regional capital, Tamale told Joy News’ Hashmin Mohammed that “We are also Ghanaians, and we should be part of those receiving the allowances.”
The situation is not different in the Volta Region. In the capital, Ho, the students say they are being unfairly treated by the government and demanded that the allowances are released immediately.
Source: Myjoyonline.com