Suspected Covid-19 patients share wards with others at Korle-Bu 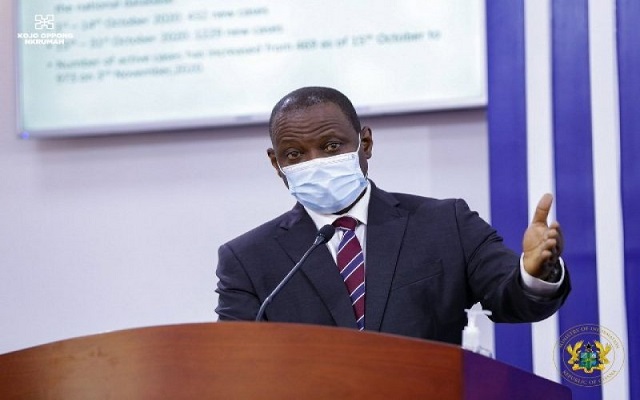 JoyNews’ investigations have uncovered persons suspected to have contracted Covid-19 are being held in the same ward as other patients including pregnant women at the Korle-Bu Teaching Hospital.

This is the VIP ward of the facility’s Maternity Block Accra.

The reason is simple; like other hospitals, the places designated for Covid-19 cases are full.

Hospital records show that on February 8, 2021 doctors were treating a patient suspected to have contracted the virus.
The patient was asymptomatic but was showing symptoms of fever, difficulty in breathing and coughing.

Clinical notes on another patient with a suspected case on admission also read; “Sars-covid-2 test to be done, focal person contacted, he reports they have run out of logistics currently. To restock as they take samples as soon as possible.”
Another patient with similar symptoms was also admitted into the ward on February 9, 2021. On February 5, 2021, another patient with symptoms such as severe anemia and pneumonia was also admitted to the same ward.
Some hospital staff of the maternity block who spoke to JoyNews under the condition of anonymity said the patients were on oxygen when they were brought in.

“Some came in with oxygen, but, they are a bit better. Oxygen has been discontinued. Currently, their condition are not so bad, that we would say for this patient we are going to lose her, no. The only problem is we are still waiting for their test results,” the staff revealed.
When JoyNews visited the ward, the team observed that the VIP ward has been divided into two. Patients with suspected cases of Covid-19 are treated at one wing while the regular ones are at the other end. The staff described this as extremely risky to the patients.

“One side, which is the west, we receive normal cases, and the east is where we have the suspected cases, which is very dangerous, but, what can we say.”

Hospital staff told JoyNews what’s more dangerous is they use one protective clothing for all clinical inspections. This is because of inadequate PPE at the maternity block.

The staff said they have started taking Covid-19 medication in order to protect themselves as well as their families from contracting the virus.

“We are already on some medication. I have placed my kids and the family on the medication. We are on it,” the worker explained.

They confirmed to the news team that transferring such cases to the ward is because the holding bay for isolation is full.

“My concern is at least we should be told whether we are using the sixth floor as a holding bay so that we psyched psychological. Also, we need training, training has to be given to us. Those who take care of Covid patients undergo special training and those of us in the ward, we have not been given any training. How do we cater for the patients if we don’t have PPEs?”
He further indicated that; “I think we need training to cater for the patients well. They are our patients, for that one, we can never say we won’t take care of them.”

Head of Public Relations at the Korle-Bu Teaching Hospital, Mustapha Salifu has however denied the claims that Covid-19 patients and non-carriers are being kept in the same ward.

According to him, their holding bays take one suspected case at a time to prevent the spread of the virus. On claims of inadequate PPEs, Mr. Salifu said the hospital has enough for both staff and patients.
Source: Kwetey Nartey